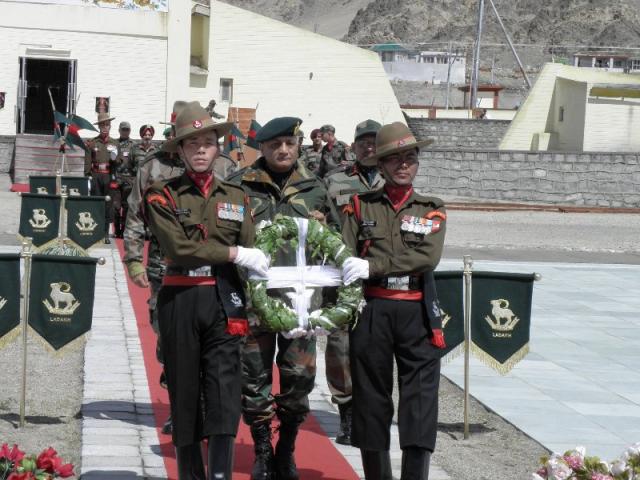 Leh,India April 20 (Scoop News) -General VK Singh, PVSM, AVSM, YSM, ADC, Chief of the Army Staff  today praised soliders for carrying out their  task with élan whilst braving the hardships of weather and terrain in the most inhospitable area of the country.

The General while interacted with the officers and troops at Leh assured them that the entire nation is aware and grateful to the soldiers for guarding the nation’s frontiers.  He exhorted the soldiers to continue the excellent work.  During the interaction, he enquired about their welfare and problems.  The Chief was pleased to see the enthusiasm and motivation of the troops.

Earlier General VK Singh, PVSM, AVSM, YSM, ADC, Chief of the Army Staff alongwith Mrs Bharti Singh, President Central Family Welfare Organisation visited  Leh on Tuesday.  The General  was received by Lieutenant General BS Jaswal, PVSM, AVSM**, VSM, GOC–in–C, Northern Command and Lieutenant General SK Singh, AVSM GOC, Fire and Fury Corps.  This is the first visit of the General to the forward area after taking over as the Chief of the Army Staff on 01 April 2010.  The General visited the War Memorial and paid homage to the martyrs, after which he was briefed at the Hall of Fame on the epic battles fought in the Corps Zone.

The Chief of the Army Staff thereafter visited the  Corps Headquarters, where he was briefed by Lieutenant General SK Singh,  on the state of operational preparedness, training activities and numerous development works undertaken by the formation in the remote region of Ladakh

Mrs Bharti Singh, President Central Family Welfare Organisation visited the Women Empowerment Centre at Leh, being run by the Fire and Fury  Corps for the local women of the remote region, where she was received by Mrs Kusum Singh, President Family Welfare Organisation, Fire and Fury Corps.  She was briefed on the numerous courses being conducted by the Centre to ensure that the Ladakhi women are more self reliant.  She interacted with the local students undergoing various courses at the centre and was pleased at the confidence and exuberance shown by the students.  She congratulated them on their progress and attaining a high degree of technical proficiency.

Filed under: Media & Tech, World
Share Tweet Pin G Plus Email
previous article: Chinese Tourists Flock to Japan, But Skip the Galleries
next article: No compromise at all will be made on the issue of human rights violation:JKCM