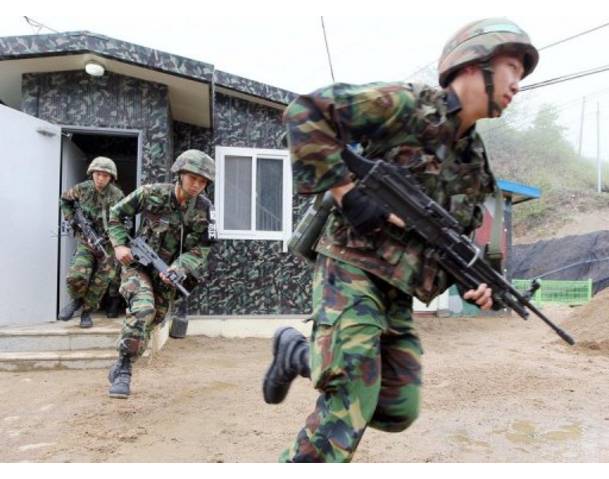 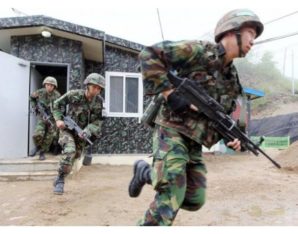 South Korean Army soldiers scramble during alert as shots were exchanged along the DMZ  less than 24 hours ago.

The entire world held its collective breath as North and South Korean troops exchanged gunfire on Sunday. The incident happened after the Democratic People’s Republic of Korea’s (DPRK) soldiers approached the military demarcation line (MDL) between the two countries.

The South Korean border control broadcasted “warning messages” and fired warning shots as several North Korean soldiers approached the border, but remained on their side of the DL (Demilitarize Zone) in Cheorwon, Gangwon province. Reportedly, the North Korean troops “returned fire, with the fire exchange lasting no longer than 10 minutes. No causalities have been reported on either side”, according to Yonhap news agency.

Remember this is only one side of the story – there is no way to get the North’s version of events at this time. This follows reports of a incident just last week where there was also an exchange of fire between the two sides. Such situations could easily escalate into a all out war if both sides are not extremely careful. I mean extremely careful.

The Korean Peninsula remain formally in “a state of war”, as no peace treaty was ever formally signed after the Korean War of 1950-1953.

The Korean DMZ remains one of the most dangerous places on earth!

As of 2013, North Korea had 9,495,000 active, reserve, and paramilitary personnel, it is the largest military organization on Earth.

There are at least 915 vessels in the Navy and 1,748 aircraft in the Air Force. North Korea also has the largest Special Forces in the world, as well as the largest submarine fleet. Despite the frightening numbers, most of the equipment originates from Cold War technology.

This number represents nearly 40% of the population, and is the numeric equivalent of the entire population between ages 20 and 45.

Stuck in the middle is the United States Forces Korea (USFK),with 28,500 American soldiers, sailors, airmen and Marines in South Korea, U.S. forces in South Korea are a forward presence in the region, right along the DMZ or Demilitarized Zone.

Filed under: News, World
Share Tweet Pin G Plus Email
previous article: The Essentials of Advertising Your Business
next article: Investor Alert: Deadline In Lawsuit against Bankrate Inc (NYSE:RATE) coming up on 11/17/2014