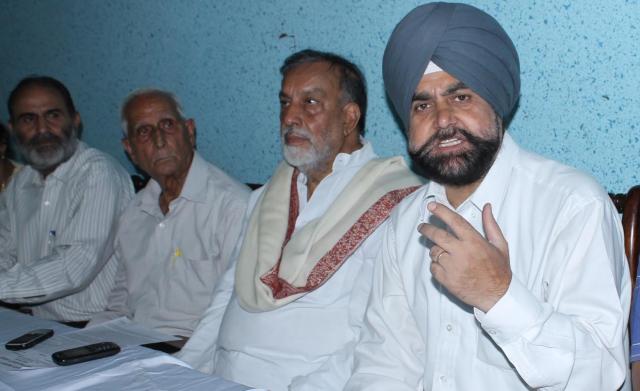 Jammu & Kashmir: Prof. Bhim Singh (Patron EPTWS) and Inder Mohinder Tar Singh, President Evacuees Property Tenants Welfare Society (Regd) jointly addressed the media persons. On this occasion Prof. Bhim Singh strongly condemned the functioning of the custodian department and the way the common tenants are being harassed by the said department is intolerable. He said that the department has become a den of corruption and the tenants are being taxed by the same on one or another pretext. He said that he will fight for the redressal of the grievances of the tenants both on the streets as well as in the court of law, for this tenant have to strengthen the movement and be ready to fight to achieve their goal.

Bhim Singh reminded that the timely stay taken by him against the resettlement act has saved the tenants otherwise by now all the tenants would have been thrown out of these houses. The Resettlement Act should be abolished immediately as the same is only to deprive us from the ownership rights. This was a secret agenda of then government to uproot the tenants from Jammu region. He said that he will not allow any injustice with the tenants rather shall go all out for the redressal of the grievances of the tenants. The main objective of the present leadership of EPTWS to get ownership right is favoured and we fully endorsed the same.

Inder Mohinder Tar Singh while addressing the media said that our another Patron Shiekh Abdul Rehman (Former Rajya Sabha Member) could not attend this press conference as the same is away to Kashmir to attend a seminar in Kashmir University. Tar Singh said that excesses of custodian department shall not be tolerated anymore. We have suffered a lot and are still suffering and we feel that we are still slaves even after 64 years of independence. We did get independence but we are undergoing the slavery of custodian department.

Our ultimate demand is that we should get Ownership Rights on the EP & BC houses and the land out rightly .Our fourth generation is undergoing slavery of the department. We are ready to pay the cost of the houses at the time of construction plus the administrative charges. The tenants are not supposed to pay as we have already paid the exorbitant amount in the shape of rent. Those who have left even their fourth generation is living in Pakistan and now if anyone comes back can be given the amount deposited by we tenants. The land allotted to the refugees should also be given ownership right as per the Agrarian Act 3A of 1976, strongly demanded Tar Singh.

Both the leaders strongly opposed the attitude and high handedness of the custodian department and the Revenue Ministry. Though department has started repairing few houses we urged upon the Revenue Minister to direct the concerned ones to undertake the repair work of other houses the list of which has already been submitted to the Custodian General. Many of the tenants’ houses are in bad shape and at any given time the houses may collapse as the monsoon is almost on the verge of beginning. We should learn a lesson from the past as the nature of calamities and disasters have damaged and many houses have collapsed from time to time. There could be loss of life and if so happens the custodian department shall be the sole responsible as the department is not undertaking repair works and even not allowing us to do so at our own expenses. The tenants shall be forced to undertake the repair works as we do not want any loss of life. We again and again urge the Chief Minister to intervene and direct the department to immediately undertake the repairs at their own cost otherwise let us do the same at our own cost but those who cannot afford to do so, should be done by the department. We also oppose the way department is charging the tenants as per the record note Rev/EP/18/2010 dated 19-10-2010. We urge that the same should be revoked immediately otherwise we shall knock the doors of the court of the law.