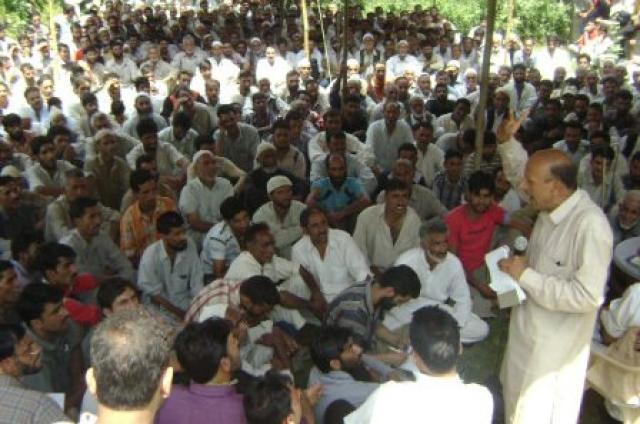 , April 06 (Scoop News) –     MLA Langate Er. Rasheed  todaystressed upon Governments of India and to remove hurdles in cross LoC trade at Chaken-da Bagh Rawlakote & Uri- Muzaffarabad without any further delay.  This he said while interacting with prominent citizens at Sauronkote  after his return from Chaken-da- Bagh situated at Line of Control (LoC), where he had visited to take stock of situation and difficulties faced by the traders engaging in cross LoC trade.

Er. Rasheed  stressed upon the two governments to facilitate the visits to cross LoC for all the Kashmiris who are interested for the same. MLA Langate said that there is an urgent need to ease the permit system & increase the no. of trips of buses to travel across the LoC. He urged upon the two governments to provide tele-communication system and banking facilities to give a boost to the trade.

He said that people across the LoC should be allowed to use their own vehicles after finding out the easiest possible mechanism for the same. After concluding his three day visit to Pounch & Surankote, He had an interaction with senior citizens, social activists , Traders  & intellectuals  at Rajouri, During the interaction MLA Langate congratulated people of Rajouri  for showing communal harmony irrespective of atttemptist to provoke them by communal forces at behest of Dr. Parveen Tokadia. Er. Rasheed said that there is a emotional bonding between the people of Rajouri & Pounch with the people of . He stressed upon the government to take up in hand construction of tunnel at Mughal road so that the road becomes operational  round the year.