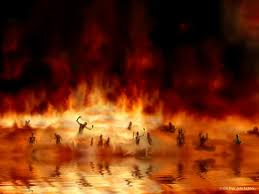 Purgatory, Hell, and The Lake of Fire

For each and every human being, a physical, fleshly death is inevitable.

Each of us must die, shedding our fleshly sinful bodies. But, spiritually our spirits carry on.

Either one has accepted Jesus as savior and redeemer, by faith believing Jesus as Lord, the Messiah and becomes saved by Jesus Grace, or, because of one’s lack of belief in Jesus, one is condemned to eternal separation from God and cast into the Lake of Fire, a place of eternal torment.

Extreme pleasure in heaven with God, or, Extreme suffering without God in the Lake of Fire.

Purgatory is a mythological place created by the Roman Catholic Church.

It is believed by Roman Catholics to be a special place where once a person dies, their spirit goes, if that person has not yet declared their belief by faith in the forgiveness and resurrection powers of Jesus Christ.

It is believed by the Roman Catholics that this is some waiting place or spiritual stop over, between heaven and hell, and that it is possible through prayers by the living, to acquire a release for the spirit, so that it can go to heaven.

I call it a mythological place, because there is absolutely no scriptural reference in the Holy Bible, naming such a place or describing such a practice as praying for the release of souls/spirits.

In the Old Testament, there are many references made about Hell. The Holy Scriptures tell of caves on the edge of the Lake of fire or a fiery pit where the spirits of those believers in God, pre-resurrection of Jesus Christ, waited, awaiting Jesus to come for them after his crucifixion.   See: MATT: 27: 50-53:

The Lake of Fire

The Apostle John tells us: (v.10) “And the devil that deceived them was cast into the lake of fire and brimstone, where the beast and the false prophet are, and shall be tormented day and night forever and ever.”

(v.12) “And I saw the dead small and great, stand before God and the books were opened, and another book was opened which is the book of life: and the dead were judged out of those things which were written in the books according to their works.”

(v.15) “And whosoever was not found written in the book of life was cast into the lake of fire.”

Between eternal happiness or, eternal suffering, what is your choice?