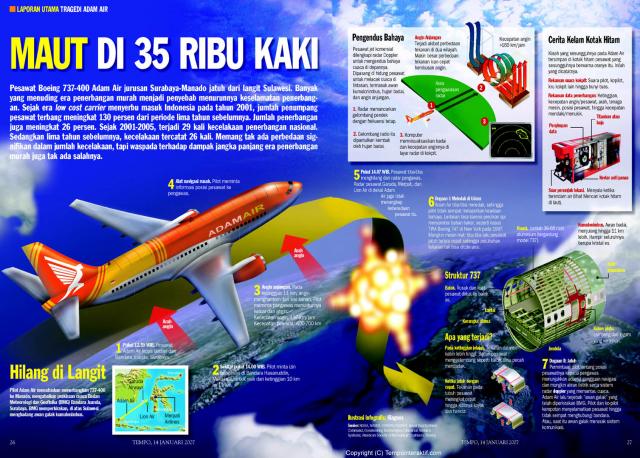 Government is still not dare to clarified or even retrieving financial and operational reports from airliner operators.

European Union flight regulator will moved the banned which allowed much more domestic airline serving eruopean route in the future.

About 2 months ago, transportation minister signed new Permenhub(Peraturan Menteri Perhubungan) number 25 years 2008. This new rule will replace the old one ie Kepmenhub number 81 years 2004. The purpose for this rule replacement is such as to increase the flight safety among the airliners. Now the airliners operator need at least own 5 airplanes on the field, 2 private own and the other 3 leasing. Meanwhile in the rule before, they just only need 2 airplanes for operational granting.

The rule isn’t just regulating better flight safety but also to increase better Airliners consumer rights in the future. Scheduled airliners have to announce the delay 45 minutes before departure to their consumers through call or short message service(number 37/ 1st alinea). Corporate with mass media to widely announcing the delay(number 37/2nd a alinea). If the delay caused by operators then, the company should compensate their customer with snack and drink-for 30 to 90 minutes, food and drink or transferred to other operators for another 90 to 180 minutes. If there is no other airliners operator serving the route then Company should provide other accommodation. (number 37/2nd b alinea)

Meanwhile the firm also need to provide and show the financial performance report which has been done by public accountant. Because there has been  studied about huge correlation between airliners financial and capability to provide safety ensurement. According to Capt. Cartono, Garuda Indonesia Chief pilot said that the operators shall not just only hand over financial report but also operational report to regulator for examine which the firm is healthy or not in the present and future purpose.

In USA, FAA rule which has been created at year 1958 have AER(Airline Economic Regulation) allowing CAB(Civil Aeronautics Board) to request financial report and clarified it. The AER will put sanctions for operators fail or late to submit the financial report on time, leaking the financial information without CAB authorities, refused to answer the CAB questions and false information to the regulator.

Eventough the rules able to boost airline passengers capacity, competition has force the firm to settle price below its operational cost. Many airliners at the end come to bancropt. To prevent this from happening, regulators force the firm from merging or even acquisition. Code share and joint flight corporation are allowed(Chapter IV Permenhub No.25/2008).