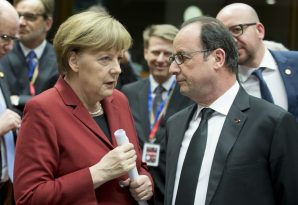 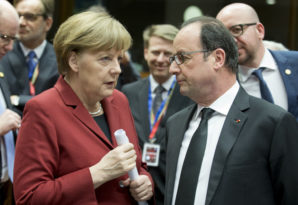 The latest statements of high-ranking functionaries of chancellor Merkel’s government regarding possible reduction of sanctions against Russia feed the hopes of the Russian governmental circles that the West will get tired from the confrontation with Moscow and lose its unity. The pro-Putin forces will immediately invade into the appeared gaps and cracks, methodically, diligently and insistently trying to enlarge them broad and deep.

Making a speech at the German-Russian forum in Rostock, vice-chansellor and German economy minister Sigmar Gabriel declared that ”isolation does not work at all.” According to him, Russia and the world are interdependant and, therefore, the time is right to reduce sanctions step-by-step. He is echoed by the Germany foreign minister Frank-Walter Steinmeier, associate of ex-chancellor G. Schröder, famous for his close ties with Kremline regime, who pushes the idea of Germany’s commitment to ”reasonably apply sanction instrument in respect of Russia. If there is a progress in implementation of Minsk Protocol, we would be able also to speak about the reduction of sanctions.” Such statements we may hear from other high-ranking European officials as well, who strive to impose the discussion regarding sanctions to the society. If last year, when the question of sanctions renewal should be formally solved at the level of permanent representatives in the European Commission, the scepticism was unexpectedly expressed by Italy and Hungary, which required discussing this question at the level of the ministers of foreign affairs, today far more states stand for reducing limitations against Russia. Probably it’s already possible to speak about the formation of some kind of coalition of appeasers at the European continent, having client relationships with Kremlin and represented by certain political and business circles of Italy, Hungary, Austria, Cyprus, Greece, Slovakia that use the new tactics claiming for partial lifting sanctions against partial implementation of Minsk-2 arrangements. And that is at the time when Russia does not show any intention to comply with the first core provisions of Minsk agreements — cessation of fire, withdrawal of heavy armament, monitoring over the boundary. What reductions may be possible in such conditions?

Current trends towards Kremlin appeasement are interpreted by Moscow as EU’s weakness and inability to stand up to the Russian expansion at the post-Soviet space and as an evidence that the EU has already been up to back down and drive to normalization of relations with Russia. In this regard the intended visit of the European Commission President Jean-Claude Juncker to the Petersburg Economic Forum (June 16-18) seems to be ill considered decision which would not bring EU anything positive. President Putin will be only firmed up that Russia by annexing Crimea and launching a war at the east of Ukraine failed to do anything reprehensible. Kremlin has already rained down the ready signals to support the dialog with the EU on the wide range of questions and blames to the address of those European politics who adhere to sanction regime terms.

We are on the threshold of the NATO Warsaw Summit (July 8-9) where the clear decisions on transition from the policy of «security guaranties» of East European alliance members to the policy of «suppression» of Russia will be adopted. At this background any further talks about step-by-step plan to reduce sanctions or lower restrictions level shall look quite comic without the Russia’s full compliance with requirements applicable to it. If political leaders express short sight and narrow-minded self-interests in respect of concessions to Putin, their nations will have to pay too high price a little bit later. In case of Russia, international community today vitally need strategic tolerance, unity and firmness.

P. S. The article has already been written when the disturbing message came from France: the upper chamber of Franch parliament (Senate) adopted the resolution addressing to the government of the country with request to gradually scale down economic sanctions introduced by the European Union agains Russia. France waved the white flag. Putin has been waiting for this moment for two years.

Filed under: News, Politics
Share Tweet Pin G Plus Email
previous article: 5 off beat things to do in Kolkata
next article: MMA Gloves and their types