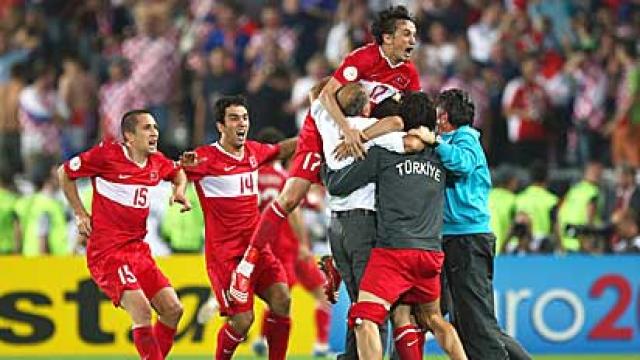 Turkey defeated Croatia in yet another late-night thriller in Vienna today to extend their fantasy dream-run at Euro 2008.

The Turks had been the only side in the tournament to come back to win after trailing in group play, doing so not only once but twice against co-hosts Switzerland and Czech Republic earlier last week to move onto the knockout stage of the competition. This time, they went down late in the second period of extra time but again managed to pull level just seconds later and force the match to a penalty shoot-out.

They never looked back afterward, decisively winning the ensuing spot-kick competition and leaving behind a stunned Croatian side to lick their wounds.

Ivan Klasnic had scored for the Croats in the 119th minute when he tucked away a header past keeper Recber Rustu, and that looked to stand as the winner deep into extra time, when Sehmi Senturk slipped quietly into the Croatian penalty box almost immediately afterward and pounced on a loose ball to equalize for Turkey as the official drew regulation to a close.

Croatia then went on to miss three out of four spot kicks before keeper Recber Rustu saved Mladen Petric’s effort to seal the victory for his side.

The Croats had looked positive throughout the match and for their part had several credible looks at goal in what was otherwise an opportunity-void match. In the 19th minute, Luka Modric collected a pin-point through-ball into the Turkish box and squared it across the face of goal for Ivica Olic, who hit the cross-bar from four yards out before Pletic headed the ball over. Croatia continued sending in dangerous fifty-yard through-balls down the left hand-side to Danijel Pranjic and Ivan Rakitic to open the field of play, sending the Turkish defense scrambling throughout the first half.

Recber came to the rescue for Turkey in the 82nd minute when Darijo Srna unleashed a free kick from twenty yards out toward the top right corner, but the stand-in keeper looked sharp as he dove to his left and pushed the ball around the up-right with his fingertips. In the 90th minute, Recber denied Olic inside the six-yard box again after the Hamburg striker latched onto a sizzling cross in the from the right side.

Then, with the clock winding down in the second period of extra time, Recber made a key mistake, chasing a loose ball down the goal-line in a foot race against Luka Modric, but Modric beat the Besiktas keeper to it and chipped it in over Recber for Ivan Klasnic to tap into the empty net. Just seconds later, Sehmi Senturk equalized, firing a loose ball inside the Croatian box into the roof of the net courtesy of a quick free-kick taken by Recber and the slight confusion it caused among the Croatian back four.

In the penalty shoot-out, Luka Modric missed Croatia’s first penalty kick, followed by Ivan Rakitic and Mladen Petric, while Turkey went three-for-three before Recber sealed the game for the Turks.

Turkey now face Germany in the first of two semifinals next Wednesday, though they will be without key players due to injury and suspension. Emre Asik, Tuncay, and Arda Turan were all suspended for Turkey’s next match after picking up their second bookings in the tournament. First-string goalkeeper Volkan Demeril will also be serving his second of two matches on the bench unless he is successful in appealing the UEFA disciplinary committee’s decision. Volkan was sent off in Turkey’s match against Czech Republic after rashly pushing Jan Koller to the ground late in the match.