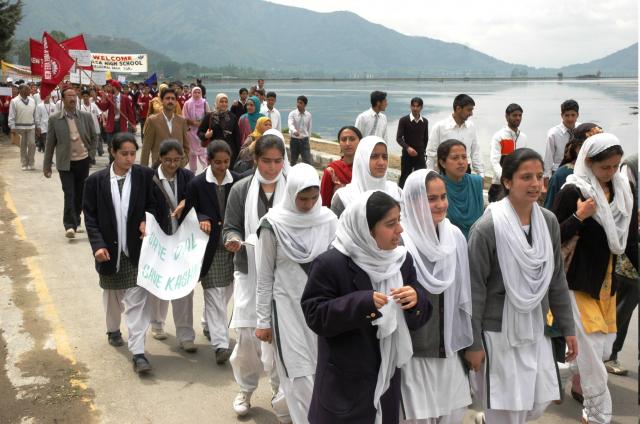 , April 22  – –In connection with celebration of World Earth Day, the Pollution Control Board (SPCB) organized 2 mega events in on Wedensday.

To mark the day, a green march was organized by the school children drawn from a large number of Eco-Clubs and members of J&K Scouts and Guides from Nishat to Habbak. The march was flagged off by Commissioner, Srinagar Municipal Corporation, Khawaja Farooq Ahmad Renzu in presence of Regional Director SPCB, Mian Javeed Hussain and senior officers of various departments.

More than 2500 students, Scouts and Guides participated in the Green March, displaying play cards and banners with catchy slogans for protection of natural resources of the Valley, particularly lakes, rivers, water bodies, mountains, meadows and forests.

The Commissioner SMC urged the youth in particular and public in general to work for the protection and conservation of environment by making active contribution in this noble cause through their sincere and dedicated efforts.

A large number of people all along 6 km stretch witnessed the Green March.

Later, a seminar was held at on the theme, “Don’t over burden the Mother Earth with Polythene”.

In his address, the chief guest dwelt upon the hazards of polythene saying that it was the responsibility of the entire society to avoid using polythene in their day-to-day life. He said the is getting polluted day by day mostly due to polythene.

On this occasion, an Eco-Friendly Website was also launched. A publication of renowned Environmentalist Mr. M.S. Wadoo titled ‘Meri Khahanee’ was also released by the chief guest. The environmentalist has also the credit of having discovered the oldest chinar in the valley.