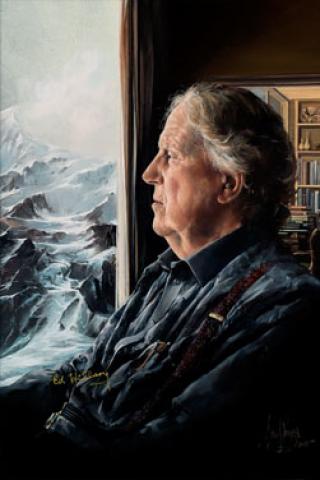 Sir Edmund Hillary, the unassuming beekeeper who conquered Mount Everest to win renown as one of the 20th century’s greatest adventurers, died today, New Zealand’s prime minister announced. He was 88.

The gangling New Zealander devoted much of his life to aiding the mountain people of Nepal and took his fame in stride, preferring to be called "Ed".

Hillary died of a heart attack in Auckland City Hospital at 9 a.m. local time today. His death “is a profound loss for New Zealand,” Prime Minister Helen Clark said in a statement.

Hillary, with Sherpa Tenzing Norgay, conquered the 29,035 foot (8,850 meter) summit on May 29, 1953. His love of the mountains and affection for Nepal’s Sherpa people who live on the slopes of the Himalayas developed into a lifelong effort to raise money for schools, hospitals and airfields.

In recent years, Hillary railed against the environmental damage to Everest caused by ever-increasing numbers of climbers. Mountaineering had also lost the camaraderie that characterized its early days, he said in 2006, when as many as 40 climbers left a British mountaineer on Everest rather than attempt a rescue.

Hillary, known to the Sherpa people as Burra-sahib, meaning “big in stature, big in heart,” returned to Nepal many times to climb. In 1977, he journeyed by jet boat to the source of the Ganges River. He was New Zealand’s high commissioner to India from 1984 to 1989, the equivalent of an ambassador among British Commonwealth countries.

The Himalayan Trust, established by Hillary in 1960, has helped build three hospitals, 13 health clinics and more than 30 schools, according to its Web site. He successfully pushed for the creation of the Sagarmatha National Park in the valleys below Everest, funded by the Nepalese and New Zealand governments and now a World Heritage site.