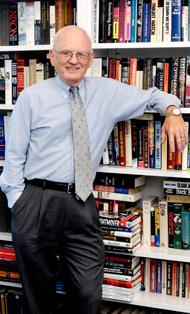 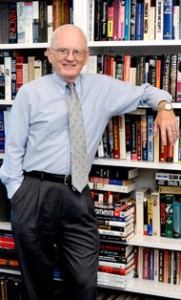 “We coach them (students) on how, if there are people aware that they’re interested in the CIA, how to disabuse them of the notion that it ever went anywhere,” Olson said. “Their safety will depend on whether people will buy their cover or not. We are very, very scrupulous about building covers and preserving covers”, says Olsen in an article published for the Des Moines Register.

James Olson, a quite unassuming university professor once worked for the Central Intelligence Agency as a spy for 31 years chasing Soviet KGB secrets during the Cold War.

Olson says his job at the time “boiled down to chasing Russians.” He was looking for those with information who were willing to betray their country and pass on secrets in exchange for some sort of inducement. These inducements could range from money to health care to getting a family member to the United States.

“It’s manipulative,” Olson said. “It’s dishonest, because you’re befriending people for an ulterior purpose, but it’s the nature of our business. It’s the bread and butter of spying”, he admitted in a recent interview with the Des Moines Register.

Today he recruits spies (I mean students) at  Texas A&M’s Bush School of Government and Public Service, where he teaches courses on intelligence and agency spy craft.

Its no coincidence that several of Olson’s former students have gone on to careers with the CIA, FBI, the State Department and the Pentagon.

The Bush School has become a prominent recruiting ground for government agencies, Olson said, because of the way it prepares its students with hands-on training and guidance from faculty who served in the field.

Olson teaches courses in the areas in which he worked: intelligence, counter-intelligence, national security, counter-terrorism and international crisis management. His students say he uses his own anecdotes and has them role-play scenarios in class.

“Our students get the opportunity to understand what that’s like before they get there, and I don’t think there’s any other program in the country that takes students into the real world of intelligence the way our program does here,” Olson said.

He says he looks for students that he calls “infected,” because they “have that bug to serve.”

According to the CIA own website it also recruits potential spies in High School:

Learn more about and apply for specific internship and co-op positions by visiting the High School, Undergraduate and Graduate Student pages.”