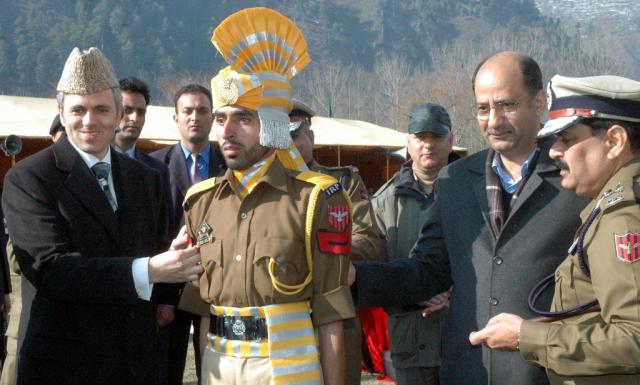 Sheeri/Srinagar, December 19 (Scoop News) –Chief Minister, Omar Abdullah Wednesday said that excellent police-public relation holds key to maintain law and order and curb crimes in the society. He said credibility of police gets rooted by the humane approach of men in uniform towards general public and their delivery of justice on merits.

Omar Abdullah said that police force in Jammu and Kashmir has to perform twin duties of tackling militancy and rendering normal policing to ensure order and restrict crimes. “The two are of different nature requiring different methodologies to address”, he said appreciating Jammu and Kashmir Police force for handling the different situations with capacity.

The Chief Minister said that challenges before Jammu and Kashmir Police force are varied and they have to be fully trained and equipped to face these challenges in a befitting manner. He said that the best service to people is determined by the personal attitude and delivery of justice. He said his government is taking all measures to train police force in the best way possible and equip it with all modern police requirements. He said modernization of Police Department is continuously going on besides upgrading and improving their service conditions.

Congratulating the passing out cadets, the Chief Minister advised them to make justice, honesty and public friendly attitude benchmark in service delivery. “You have joined a new family. Your challenges are huge and you will be tested differently”, he told them adding that their inner conscience, clear vision, sincerity and honesty should guide them while dealing with crime doers and curbing the crimes in the society. He told them that they have also to deal with order situations often created by vested interests for their gains. “You have to apply your mind rightfully and use least force while dealing with public in the cases of maintenance of law and order”, he said.

The Chief Minister told the cadets to prove worthy of the uniform by rendering meritorious and praiseworthy service for the department and the State. He said, “you have to abide by your oath you have been administered while entering police service and uphold the principles of rule of law and justice”.

The Chief Minister also praised the Principal and his team for imparting training to the cadets and making them capable of handling different situations with capability and capacity.

The Director General Police said that 6 Police Training Centres and Police Academy in the State are being upgraded to impart best trainings to the State police force to make it one of the best forces in the country. He said police is the guardian of law and order and Jammu and Kashmir Police has rich tradition of exhibiting bravery and commitment to their duty.

As many as 897 cadets after took part in the passing out parade. Constable Mohammad Iqbal who was adjudged all round best cadet in the 9 months training programme was granted one rank promotion. Various awards were also given to the cadets showing excellence in different disciplines.