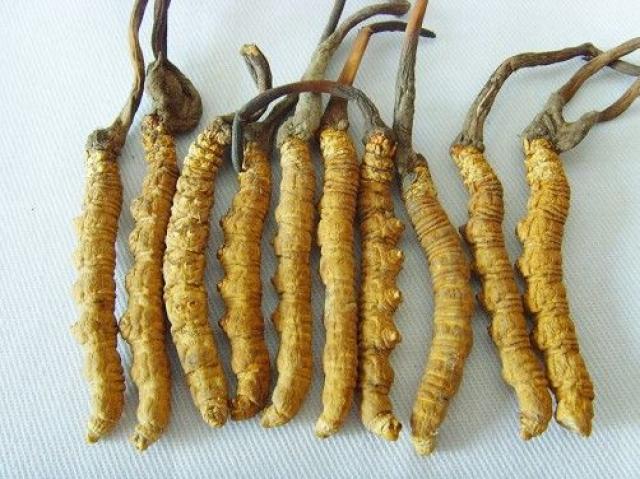 World’s most exotic caterpillars – the Cordyceps mushrooms – that grow exclusively in the Himalayan region, are under climate change threat.

Cordyceps/Caterpillar mushroom is a rare specie of edible fungi widely used both in clinical medicine and as a household remedy. There are few countries where Cordyceps grow in the wild. These are Nepal, Bhutan and the Tibetan Highlands of China. Locally known as "Yartsa Goenbub" (Bhutanese) and "Yarcha Gumba" (Nepali), the mushroom is considered potent at strengthening lung and kidneys, increasing energy and vitality, stopping hemorrhage, decreasing phlegm, and as an overall tonic. These are reasons why the mushroom is has an extremely high demand in the international market with India, UK and the US being the largest buyers of the fungi.

I first learnt of the exotic mushroom four years ago when I met Ghyam Bahadur – a mushroom collector and a resident of Dolpa district of Nepal, which is the largest producer of Cordiceps in the country. Ghyam carried a plastic bag, stuffed with dry Cordyceps. There were about 3-4 kgs of the mushroom and Ghyam was on his way to Ghorepani – a market town in Annapurna region that drew hundreds of tourists every year.

The mushroom, said Ghyam, would fetch him about NPR 30,000, (however, in the international market a kg of Cordyceps sells for an incredible USD10,000) – enough to feed his family of 5 people, especially during the monsoon and the harsh winter.

But today, after four years, Ghyam says that things have changed since we last met. Despite all his efforts, he hasn’t been able to collect half of the mushroom he did in 2007. The reason; there just aren’t enough of the fungi to collect. This year it has been particularly bad; there was only about half a kg of the mushroom he could find.

Normally, there is a belief that there is a bumper production of Yarsa Gumba only in every four years. The four years in between is needed to help grow the caterpillar population (Yarsa gumba, which in Tibetan literally means ‘summer grass, winter insect’, is actually a caterpillar entombed inside the body of the mushroom).

But it hasn’t been so and Ghyam says it’s because of the changing climate. After winter, as temperature increases and the snow melts, Yarsa Gumba emerges and is harvested at this time. “You see, the weather these days is very uncertain. Sometimes, there is no snow in all of the winter. Sometimes there is snow even in late March. The winter starts too late,” says this 58 year old man.

Ghyam’s worries have recently found echoes in Bhutan too. According to media reports, this year the yield is going to dwindle. The decline reportedly started in 2009 (total collection: 594.731 Kg) and in 2010 it further decreased, amounting to 550.65 Kg.

In Bhutan also the decline is attributed to Climate change, besides increasing number of collectors. Cordyceps production requires near warm to freezing temperatures for its life cycle.

In both Nepal and Bhutan, Cordyceps is considered a very important and lucrative resource the benefit of which is being enjoyed by the people in the high altitude areas. In fact in Nepal, the government had a ban on Cordyceps gathering until 2001, but later lifted it, thus allowing locals like Ghyam to collect the mushroom again. There are, however, specific collection rules and regulations in place, such as, each collector must pay NPR 500 to NPR 5000 for getting a permit to collect the mushroom.

The governments in both countries are said to be working on a sustainable harvesting regimes and research on the life cycle of Cordyceps has also been initiated.
But will these measures be enough to restore the production of Cordyceps if the climatic condition in the region continues to change? That, truly, is a million dollar question for the million rupee fungi.
Filed under: Health & Science, World
Share Tweet Pin G Plus Email
previous article: HAPPY HALLOWEEN TO THE 10%
next article: MLB 2011 World Series Game 7: Scores-Schedule-Tv-Starting Pitchers