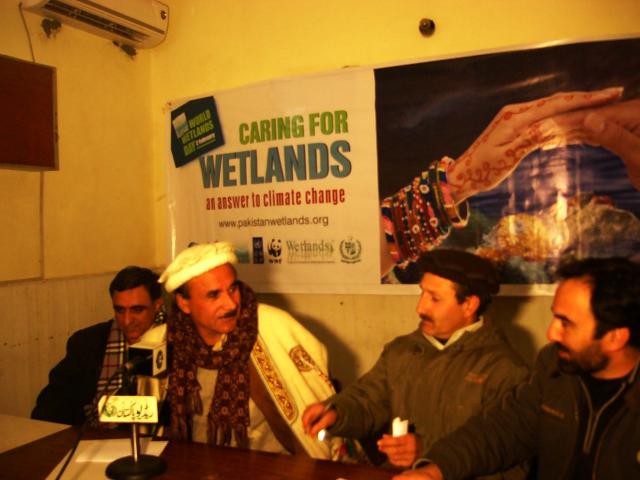 World Wetland Day celebrated at Chitral.
CHITRAL: World Wetlands Day marks the date of the adoption of the Convention on Wetlands on the 2 February 1971 in the Iranian city of Ramsar where some 157 countries participated in this convention. Each year, February 2 is observed as an opportunity to undertake actions to promote awareness of wetland values and benefits. At the same time, this is the day to reiterate our commitment for the cause of wetlands by reflecting on our past activities and planning for the next year intellectual said while celebrating this day Hamid Ahmad social organizer Pakistan Wetland Program  said.
This year World Wetlands Day is being celebrating with the special theme: ‘Wetlands, Climate Change and Biodiversity’ and the slogan ‘Caring for Wetlands: an Answer to Climate Change’. The topic is very relevant and timely as it links two events the UNFCCC COP15 in December 2009 on climate change, which brought together the world’s leaders, and the International Year of Biodiversity in 2010. Caring about climate change means caring about wetlands, which in turn means caring about biodiversity.
Wetlands outweigh many ecosystems in terms of productivity. However, the natural integrity of wetlands has been continually reduced by unsustainable management practices and the impact of climate change. If timely precautions are not taken, then the habitat of rare species of flora and fauna, and wetlands biodiversity overall, are in danger. People’s livelihoods may be trapped in the labyrinth of an ecological crisis. Wetland degradation should be halted immediately and reversed as much as possible without affecting the functions and services of other ecosystems.
Implementation of an ‘ecosystem approach’ that aims at the reconciliation of short-term human needs and the long-term requirements of biodiversity will contribute both to the restoration of wetlands infrastructure and to the sustainable management of this natural resource is dire need of the time.
In order to foster maintenance of the natural integrity of the wetlands Ministry of Environment through  Pakistan Wetland Program has initiated a wetlands program that facilitate implementation of the Convention on Wetlands in Broghul Valley  Chitral.
Database for the wetlands of the greater Himalayas, and is promoting a trans-Himalayan transect approach in the region intended to help improve understanding of various aspects of environmental changes on the mountain environment, including high altitude wetlands. A program was on aired through Pakistan Broadcasting Corporation (Radio Pakistan Chitral) on the title of "Caring for Wetlands an answer to Climate change" organized by Pakistan Wetlands Program Chitral. Dr. Inayatullah Faizi Assistant Professor Degree College Chitral, Imtiaz Hussain Lal Divisional Forest Officer Wild life, Iqbaluddin Sahar Secretary Zilla council Chitral, Iltaf Ali Shah forest range Officer, Yousuf Shahzad Assistant Director Information (PID), Hamid Ahmad Mir social organizer of PWP and other intellectual participated in radio program as panellist. They highlighted importance of celebrating this day and briefed audiences about wetland sites at Chitral as well as promoting of Eco-tourism in the district.
Social Organizer of PWP told that they providing alternate appliances and equipment to save natural resources like forest and wetland. He said that they distributed such equipments and home appliances running by solar energy at 143 houses at Broghul valley were there is no other source of fuel and energy. He said that by this way we create awareness among the masses to motivate them for conservation of these wetlands. A large number of audiences asked many questions on telephone regarding illegal hunting of migrating ducks from Siberia to Chitral and construction of lakes for this purposes  on a large scale at Chitral .they were responded by DFO wild life and other panellists. The audiences suggested for banning illegal hunting of seasonal migrated birds and discouraging this trend so as to save them from genocides and launching campaign regarding awareness raising about conservation of wetland and other natural resources.
G.H. Farooqi PO Box No. 50 GPO Chitral Pakistan phone No. 03025989602, 0943-302295, 414418
Email: gulhamad@gmail.com