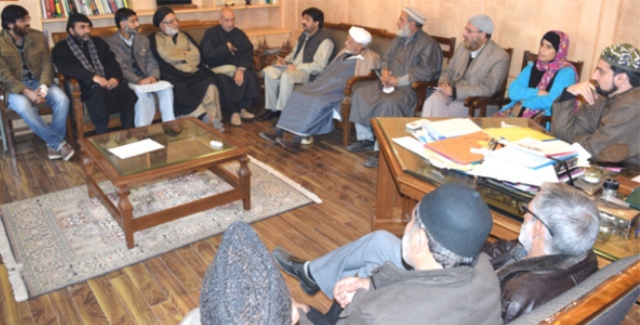 Representatives of all the hurriyat constituents were present in the meeting.

The participants discussed the ongoing political situation besides taking detail stock of organizational matters pertaining to the conglomerate.

Rejecting the election drama being conducted in Kashmir, the participants stated that the futile exercise of polls never had any sort of bearing on the disputed status of Kashmir, neither would it have in the future.

Asserting that the people of Kashmir are yet to decide their political future, the participants stated that UN resolutions provide the legal basis to the disputed status of Kashmir.

They added that solution to the Kashmir issue could be found either by implementing UN resolutions or through mutually accepted solution hammered out by a meaningful dialogue between the three stake holders.

The participants expressed serious concern and strongly denounced the way the pro-Indian political parties were splurging money on the so called sham elections,furthering corruption and greed amoung people which would negatively influence the society.

They said that the cherished dream and agenda of the extremist right wing Hindu organisation, the RSS,of Indianization of Kashmir- which in their terms means Hinduisation , is a very dangerous design and will have serious repercussion for the region, if not checked.

Extremism in both politics and religion is a disastrous trend.

The participants said that forces who play politics on communal and divisive lines have always been rejected by the mature and brave people of Kashmir,and they will never be allowed to succeed by them.

Expressing concern over the escalation of tension between India and Pakistan,the participants said that the people of Kashmir were always at the receiving end of it.