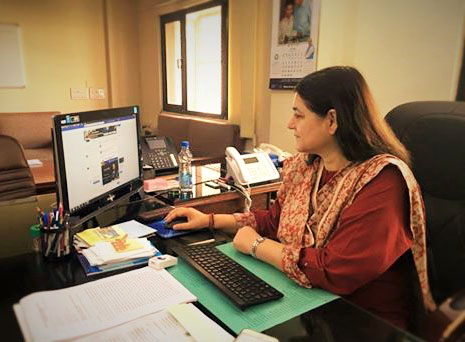 The Union Minister for Women and Child Development, Mrs. Maneka Sanjay Gandhi having a live facebook chat on the achievements of WCD Ministry, in New Delhi on June 01, 2016.

New Delhi (PIB-GR-TYP-BIN): The Ministry of Women & Child Development has scaled another milestone in the area of social media when the Facebook site of WCD Ministry hit 2,00,000 likes on 1st June, 2016. The Facebook site of WCD Ministry added 1,00,000 likes in less than five months. In an attempt to apprise beneficiaries about the policies framed and the schemes unveiled for them, the Social Media wing of the Ministry puts out content from which every common person can benefit.

The Minister of Women and Child Development, Mrs. Maneka Sanjay Gandhi took to Facebook on June 1, 2016, to have a one-on-one interaction with people through a Live Facebook Chat. The activity reached out to nearly 1,00,000 people, with over 1,600 questions received. The Minister has promised to answer all the questions personally.

On Twitter too, the Ministry’s handle (/MinistryWCD) uses every opportunity to post content to empower the beneficiaries and to enhance transparency of governance. The Ministry’s recent activities – release of Draft National Policy for Women, 2016, and Draft Anti-Trafficking Bill, 2016 – were trending on Twitter, a sign of being successfully able to reach out to the larger audience.

Recognizing the power of Internet in GenNext and in keeping with the desire of Prime Minister Shri Narendra Modi to connect with citizens through online space, the Ministry of Women and Child Development is now reaching out to people through popular social networking sites i.e. Facebook, Twitter, and YouTube among others.