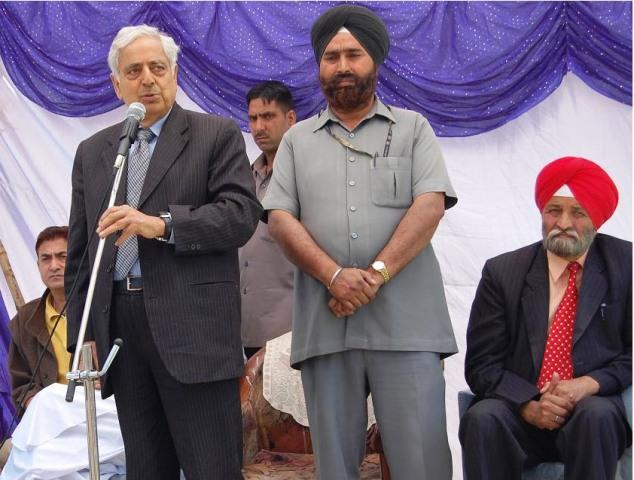 ,November 26 (Scoop News) – Peoples Democratic Party patron Mufti Mohammad Sayeed today said the failures of the Jammu & Kashmir government were mounting to an unprecedented level and its non performance was only adding to alienation. The enforced calm could prove a deceptive lull he cautioned and said the government was trying to divert attention from real issues through fake exercises of public contact while executing an inhuman plan of excesses and atrocities, which could be no substitute to a sincere effort for resolving day to day problems and addressing the larger issue.

In a statement issued today, Mufti said it was strange that while leaders from all political parties were keen to be seen talking to leaders like Syed Ali Geelani and Moulvi Umar Farooq in their own attempts to open a dialogue with the people of the country was being blocked. Referring to repeated disruption of the interactive seminars attended by these leaders, the latest on Thursday in where Umar was attacked, Mufti said it was ironical that a handful of trouble makers were allowed to disrupt serious and peaceful deliberations. Contrary to this, entire areas are being put under curfew if a government authority in were to move out into field. The significance of this duality of approach would only add to the complexity of the problems faxing the country, he said.

Calling upon the government of to display courage and realism in addressing problem, Mufti Sayeed has regretted that a cosmetic approach had given way to the seriousness and urgency that had marked the scenario recently.

He said the government actions and pronouncements on still smack of continuation of an approach that had yielded nothing but pain and disturbance in the last six decades. While some response to current turmoil that ate up 111 persons in the shape of All Party Meeting and delegation visit had raised hopes of a changed approach but it seems the effort was limited to firefighting and attempting to see move away from headlines.

Mufti said it was disturbing to see the problem once again being squeezed into security and terror frame. The exclusive dependence on security related intelligence had always come in the way of a political approach but it seems the government is willingly walking into same alleys that had led us nowhere in the past. He said while it could be true that youth may be tempted to take up arms again out of frustration but this fact could not be torn out of its context without the risk of upsetting the huge peace constituency in the state.

Mufti said in his opinion has made a collective, final and lasting break with violence and disapproved arms as a tool of political struggle. This fact had been reiterated repeatedly through peaceful street protests and participation in elections but unfortunately it had failed to evoke a matching response from the country, he regretted. He said instead of attempting once again to tarnish the image of the state as a re- emerging haven of terrorism the government would be better advised to follow at least its own roadmaps. Observing what actually was happening on the ground was nobody’s business, Mufti said instead of releasing the youth and politicians more were arrested since the announcement of 8 point agenda. Cosmetic announcements of bunker reduction were being projected as troop reduction while the valley had been effectively converted into a prison.