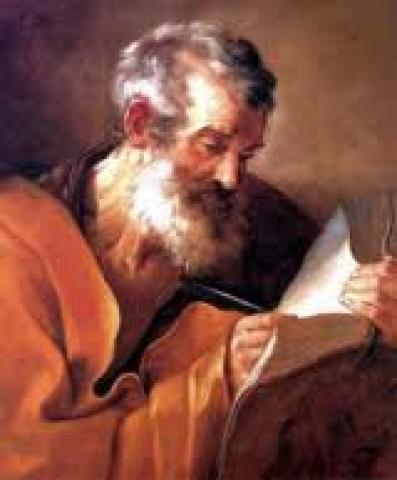 MATTHEW: 4: 18-19; "And Jesus, walking by the sea of Galilee, saw two bretheren, Simon called Peter, and Andrew his brother, casting a net into the sea, for they were fishers. And he said unto them, ‘Follow me and I will make you fishers of men.’ "

Peter becomes the first of Christ Jesus disciples and apostles. Thus we can assume that Peter knew Jesus and Jesus teachings better than the rest of the disciples. Not so though.

To be honest, I must say that Peter is not one of my favorites as far as apostles goes, for when he was with Jesus, he seemed to demonstrate a lacking of faith. I would even go so far as to say that Peter’s faith is wishy-washy or as Jesus would suggest, "Lukewarm".

Even as a fisherman, Peter shows a lack of faith in Jesus as he argues with Jesus about going out for a second time for a catch, after returning the first time empty.

Jesus fills their net to overflowing with so many fish Peter has to call another boat over to help bring in the catch.

LUKE: 5: 4-6; "Now when he had left speaking, he said unto Simon, ‘Launch out into the deep and let down your nets for a draught.’ And Simon answering said to him Master, we have toiled all night and have taken nothing: nevertheless, at thy word I will let down the net. And when they had this done, they enclosed a great multitude of fishes; and their net brake."

Even when Jesus beckons Peter to walk on the water to greet him, Peter loses faith in Jesus and sinks, but Jesus rescues him. In the upper room at the eve of the last supper, Peter proclaims his Loyalty and Jesus refers to Peter as satan and orders him behind him.

Jesus proclaims to his apostles and to Peter that Peter will deny Jesus 3 times, before the cock crows, and true to the prediction, Peter does just that, before fleeing from the courtyard and from Jesus, the man he claimed he would die for.

I must say though, in Peter’s defence, as a first generation new "Christian", a "Fisher of Men", Peter has the ability to teach us some valuable teachings, as we strive to become better "Christians". Peter’s strongest teachings can be found in his Second Epistle.

II PETER: 1: 5-10; "And beside this, giving all diligence, add to your faith, virtue; and to virtue knowledge; And to knowledge temperance; and to temperance patience; and to patience godliness; And to godliness, brotherly kindness; and to brotherly kindness, charity. For if these things be in you, and abound, they make you that ye shall neither be barren or unfruitful in the knowledge of our Lord Jesus Christ. But he that lacketh these things is blind and cannot see far off, and hath forgotten that he was purged from his old sins. Wherefore the rather brethern give diligence to make your calling and election sure: for if ye do these things ye shall never fall."

Filed under: Lifestyle, Opinion
Share Tweet Pin G Plus Email
previous article: Discipline Is An Act Of Love By God Our Father
next article: God Says His Name Is "I am" Jesus also is "I am"