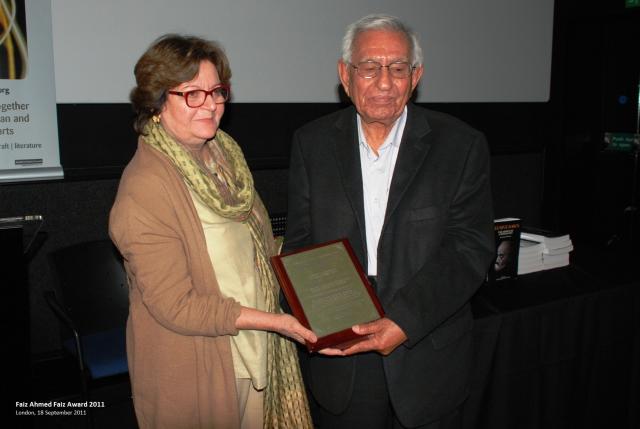 The award has been bestowed upon him in recognition of his “lifelong struggle against feudalism, militarism and imperialism”, according to the press release.

The citation praised his leadership in organising the historic March 1970 Toba Tek Singh Kissan Conference, which, “to date … remains the apex moment in the history of class struggle in Pakistan.”

The award ceremony was held at Rich Mix in London on September 18th, which also hosted the launch of a book on the great revolutionary poet, “Elusive Dawn: Faiz Ahmad Faiz — People’s Poet”, published by Faiz Centenary National Organisation.

Painter and educationist Salima Hashmi, the poet’s daughter, presided over the function, which was attended by scholars, intellectuals, poets, writers and admirers of Faiz.

She recalled Faiz’s close association with the trade union movement and his friendship with Chaudhry Fateh Mohammad.

She said Faiz’s poetry was devoted to the cause of the poor people of the world; it opposed war and supported struggle for emancipation from all oppressive systems. Only a day before his death, Faiz had gone to visit the village in Sialkot, where he was born and had advised his family to keep themselves abreast with the conditions of the common farmer, she said.

Mohammad said the Faiz Award is “the biggest award of my life”.

Mohammad was born in a small village “Chaharke” near Jalandhar in 1925. In 1947 he migrated to Pakistan and settled in a village in Toba Tek Singh, centre of Kissan Sabha movement in Punjab. He joined the Communist Party of Pakistan in 1948 and was elected member of the Central Committee of Pakistan Trade Union Federation in 1950, where Faiz Ahmed Faiz was re-elected as vice-president and Mirza Mohammad Ibrahim as president.

He was jailed six times for his committed activism for progressive causes, once during the first martial law regime of General Ayub Khan when he was kept in the infamous Lahore Fort (then Lahore Jail) and Lyallpur Jail, during which he developed a strong bond with fellow prisoner Faiz Ahmed Faiz.

With the outlawing of the Communist Party, upon his release Chaudhry sb and his fellow comrades joined Mian Iftikharuddin to form the Azad Pakistan Party which was later merged in the National Awami Party (NAP) at the Dhaka congress on September 25, 1957.

Upon release from jail, he devoted himself to organising peasants conferences which culminated in the historic Kissan conference in March 1970 in Toba Tek Singh. Organised and supported by the major progressive and Left figures, including Faiz and attended by over 300,000 people, this conference, played a major role in initiating land reforms and in the future politics of Pakistan.

Convinced in his belief that a united political party of the Left is vital for any social change, Chaudhry sb was instrumental in helping to bring about the merger of five Left parties/groups into the WPP in April 2010.

Nationally respected for his political principles, internationalism, boundless energy and infectious optimism in a brighter and egalitarian future, Mohammad has remained an inspirational and committed activist for peasants’ rights through the decades of ravages that progressive movements have suffered in Pakistan.