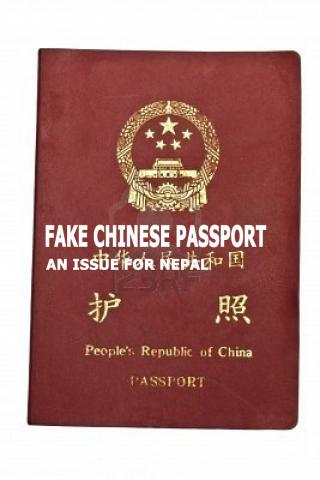 Kathmandu Nepal: The Department of Immigration (DoI) of Nepal has confirmed the passport obtained from 7 Chinese travelers during on August 12, 2011 from the Tribhuvan International Airport to be fake. During the initial investigation the DoI has put questions regarding the issue of these Chinese travelers who were caught red handed. The Chinese embassy confirming it after four months shows its laxity towards the issue. The Chinese Embassy has been requesting the DoI to hand over all the evidence but the DoI has been holding the evidence in regards to build up the case and has requested the embassy to smooth the investigation process. Though the arrested Chinese Travelers were later released on condition of presenting themselves when needed, but the Chinese nationals have been at large since their release. According to sources the names of the passport holders are Buli Wu, Laiyin Sai, Yuhong Wang, Degang Zhang, Yuanhua Zhang, Rban Ku and Zengshun Wang who were stopped from boarding on suspicion from Tribhuvan International Airport on August 12. The accused were about to board a plane to Malaysia before their arrest. Their passports carried valid visas for Malaysia, Iran and Turkey.