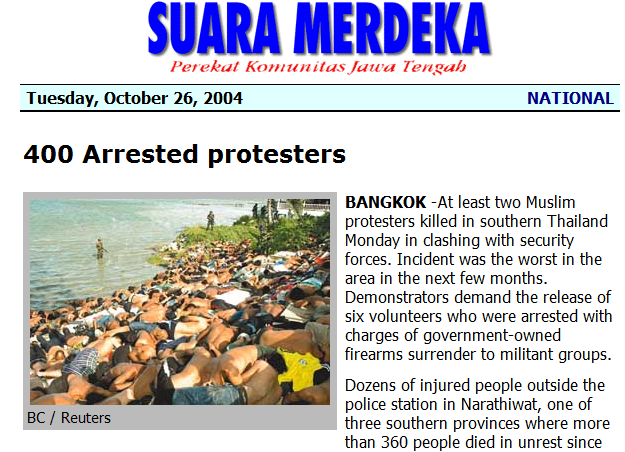 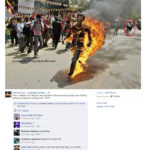 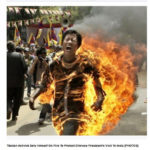 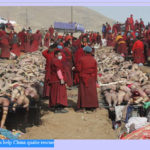 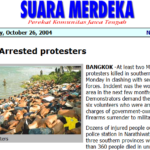 Radical Islamist groups and their members have been instigating attack on Buddhists in Bangladesh by posting fake photos and false information on Facebook and blogs about an imaginary fresh persecution on Rohingya Muslims in Buddhist-majority Myanmar.

People behind some Facebook pages and profiles, significantly from Bangladesh, are urging the common Muslims to spread those false news and take violent revenge including slaughtering the Buddhists in the country.

Photos of Thailand protesters forced by the army to lie on a shore in 2004, Tibetan Buddhists rescuing the bodies of victims after a deadly earthquake in China in 2010, charred bodies resulted from a gas tanker explosion in DR Congo in 2010, a Tibetan youth running on a Delhi street after setting himself on fire protesting the visit of Chinese president in India in 2012 – all are labelled as Rohingyas killed in Myanmar recently.

Similar propaganda was spread previously too, especially after the reports of communal riots in 2012 and 2013 came in international media. But no major incident of riot or attacks has taken place in Myanmar in the last two years, apart from excluding the Rohingyas from the 2014 census that drew huge criticisms.

The stance of the Bangladesh government to not allowing more Rohingyas, rather initiatives to deport those who have been living here for decades, drew huge criticisms in 2012. Many organisations and political quarters termed such decision inhumane.

The fake photos resurfaced recently following media outcry over the fate of Rohingyas and Bangladesh nationals rescued or arrested on the sea while going to Thailand, Malaysia, Indonesia and Australia for a better living.

The criticisms have got momentum as the government remains firm on its stance, the prime minister suggesting punitive measures against those travelling to other countries illegally, and the government’s latest plan to shift the two Rohingya camps to Hatia Islands from Cox’s Bazar.

While the radical Muslims spreading fake photos to draw sympathy of the common Muslims, many progressive activists are seen active on Facebook, Twitter and blogs in exposing the real picture and urging people to share such posts after verifying on Google. They are also asking the ordinary citizens and the Buddhists to file complaints with police seeking security.

The law enforcers are trying to trace the persons responsible for spreading such propaganda.

Following the 2014 video message of al-Qaeda leader Ayman al-Zawahiri, who announced the formation of a wing of the group in India, Myanmar and Bangladesh to protest against the persecution on Muslims, some local militant groups started working to implement their common goal – establishing an Islamic country by 2020 and expanding further, detectives say.

Apart from local Muslims of different political parties, many Rohingyas actively participated in the planned attacks on Buddhists at several places of Cox’s Bazar including Ramu in 2012 following sectarian clashes in Myanmar. They instigated the attacks by falsely claiming that one Buddhist youth had insulted Islam on Facebook.

These local groups have link with the Rohingya Solidarity Group (RSO) and international terrorist groups Islamic State, al-Qaeda and Taliban.

There are around 30,000 registered Rohingyas living in the two camps in Cox’s Bazar while the number of undocumented Myanmar Muslims is between 5,00,000-7,00,000.

Sources in police and locals say many of the unregistered Rohingyas have been involved in crimes – from trafficking to smuggling yaba and petty criminal activities. Some of them have also joined RSO, a banned outfit of Myanmar seeking independence of Rakhine state that houses most of the Rohingya Muslims.

Presence of Rohingyas is also prominent at different parts of Chittagong and the hill tracts, especially Bandarban.

Why is religious fanaticism spreading fast in Asia?

Myanmar & Ramu: No punishment? Then let’s start it again!