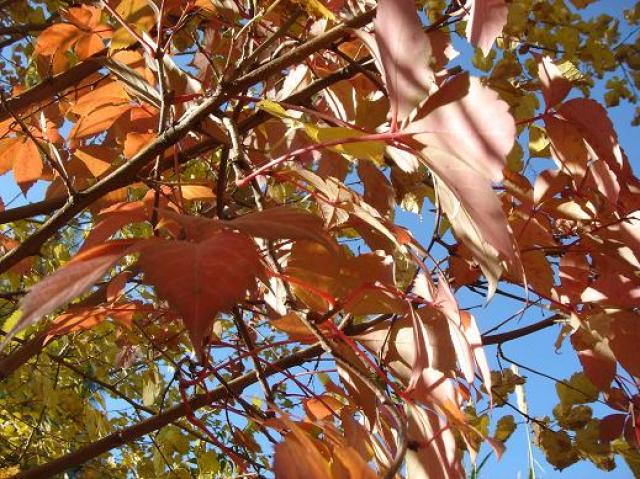 CHITRAL: Usually the Plants are introduced in Gardens, lawns and road sides for its greenery, beautiful flowers and fragrance blooming in spring. But the Plants even provide very panoramic and beautiful sceneries by bringing change in its color of leaves and look like blooming in the most dormant season of the autumn. This aspect is highly appreciated in the developed countries/societies all over the World. They have systematically utilized this behavior of the plants and are introducing such Plants in the Gardens and beside the roads creating beautiful environ in the autumn season, these views were expressed by . Abdul Rashid former Chairman Botany Department University of Peshawar in an exclusive interview to this scribe on the occasion of his visit to Fall color garden Ayun Chitral.  In the less developed countries the people cannot appreciate the natural beauty due to diverse reasons including socio-economic instability. has been gifted with tremendous Plant Natural Resources and Topographic variations he added. There is a special group of naturally growing Plants, which becomes even more beautiful and brings scenic beauty to the highest peaks of mountains and Valleys in northern during low temperature like Chitral district. When someone is passing through the Valleys, the timberline demarcated by Betula utilis (Birch) can be clearly observed by its golden yellow foliage leaves, covering a layer on the upper limit of the forests. Passing through Galayat to Murree the beautiful colors of Acer (Maple leaves) brings tremendous charming environment to the tourists. Similarly Maple trees and Poplar with olive trees in Chitral give a natural beauty in autumn.

This behavior of plants was utilized as base for establishment of a at Ayun, Chitral in 1978. This garden is situated at the entrance of historical near at Balawushti.  Major retired Shahzada Khush Ahmad-ul-Mulk has tried his best to grow and establish a unique collection of native and exotic species, which turn the color of the foliage leaves yellow, golden and pale. At the age of 92 his efforts not only encouraging the propagation and conservation of beautiful fall coloring plants, but also highlights his message for the depressed segments of the society to work hard for better tomorrow with hopes even if someone is passing through declining socio-economic crunches. The fall colors group of Plants can be further propagated and disseminated in the entire Valley. It will not only conserve the Plant Natural Resources besides encouraging the tourists on domestic as well as on international level  to the Valley improving foreign exchange for the country Dr. Rashid proclaimed. Similar nurseries can be established in the rest of the country especially in Swat (Kalam), Dir, Abbot Abad and Northern areas. The present fall color Garden is old and Journalists should project this endeavors for the conservation of such a unique collection of fall plants. K.A Mulk desires to donate the seeds of the plants growing in his garden to other nurseries desiring to follow his footprints for such a noble cause. He deplored the human attitude to the deteriorating environment & tremendous cutting of the forests all over the country. At 92 years of age he is optimistic for the same feeling of spring even in the autumn by introduction of such fall color collection in the garden and besides the roads. He visualizes a green carpet covering the peaks of the barren mountains, especially in Chitral and in the rest of the country in general. Though he is 92 years old but one can feel him to be at the age of 25 and that is due to his great love with the innocent creatures. If some one is determined, he/she can bring spring even in fall by fall color plants in their environs. This optimistic approach may alleviate our tension and worries to a greater extent.

Shahzada Khush Ahmed ul Mulk efforts and that too from his own resources, sets a good example of the civil society for involvement in Biodiversity Conservation.   Dr Rashid stressed on other people to follow K.A. Mulk and establish such garden in their lands to attract a large number of tourists for sustainable development of the area.