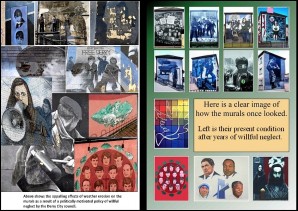 1888PressRelease – The famous murals of the Bogside, Derry, depicting the key events of over thirty years of conflict in the city are to be restored to their former glory.

The Bogside Artists have secured $33,000 from the Housing Executive to restore four iconic murals in the ‘People’s Gallery’.

The People’s Gallery created by the artists over many years comprises 12 large scale murals situated in the Bogside. Draw thousands of tourists from across the world into the Bogside area of Londonderry every year. Although signposted by the council, funding for their maintenance and restoration has been another matter entirely due to appeasement politics on the part of the main Catholic party Sinn Fein with their Unionist counterparts. It is largely a policy of ‘you-scratch-our-back-and-we’ll-scratch-yours”. The murals that speak of a past hierarchies from both camps would rather forget the murals have suffered accordingly. The consideration of the murals as art has been swept aside so much so that in Derry’s year as UK City of Culture 2013 the murals were left entirely of any media coverage, discussion or festival programs.

That did not stop the Housing Executive of Northern Ireland last week taking a more rational and objective view of the matter.

A spokesman for the H.E said: “Between 1994 and 2008 the Bogside Artists completed 12 murals that now form The People’s Gallery along Rossville Street. ”

“These large-scale murals have become an important part of the physical and social landscape of Derry. All of the murals are located on NIHE end gable walls. However, due to exposure to the weather the murals will need regular attention if they are to survive into the future and a number of them are currently in very poor condition. “The Housing Executive has therefore agreed to provide funding of £20,000 to the Bogside Artists in order to assist the renovation and restoration of four iconic Bogside murals.”

As for the murals being in bad shape because of “the weather” as stated above?

“Not entirely the case”, says spokesman for the artists Tom Kelly:

“They are in bad shape primarily because Sinn Fein blocked all possible funding in the city council and elsewhere to enable us to restore or maintain them; and we made numerous applications to council outlining the urgency of the situation. This, despite the fact that the murals are a positive and vital economic boon to the city as a whole and are known the world over. The Lonely Planet devotes four pages exclusively to The People’s Gallery.”

Why would Sinn Fein whose power derives from Republican support stoop to such depths in definance of the popular esteem in which the murals are held and their global reputation?

“Simple”, say The Bogside Artists. “Sinn Fein as a party played no part whatsoever in their creation and so have no purchase on them. They belong to the people of Derry. Unfortunately, Sinn Fein believe they alone are ‘the people’ and anybody voting for any other political party is not one of the ‘people’. The fatuity of this beggars belief but it is a fact nonetheless, that, when put into practice, has affected the lives of many people apart from us.”

Brothers Tom and William Kelly, along with Kevin Hasson, painted the first of the 12 murals in 1994, but a rebuilding project for the area by the Housing Executive almost saw them wiped out. Tom said:

“We had painted perhaps the three best known murals – the boy in the gasmask, Bloody Sunday and Bernadette McAliskey [Devlin] when the Housing Executive began a major and very necessary renovation project in the Bogside installing central heating, double glazing and insulation work, but this meant that these murals would be destroyed.

“A petition from local people calling for them to be protected was taken to the Housing Executive and Sean Mackie in particular and they were very sympathetic and the murals were saved then. “In fact the Housing Executive, instead of pebble-dashing the gable wall, plastered them in a such a way as to give us what amounted to a blank canvas to work on. ”

“The Housing Executive have remained supportive of our work ever since and they can see that the murals and our work is non-propagandist and in fact did away with ugly, sectarian graffiti that had been in the Bogside. We remain very grateful to the Housing Executive for this latest grant they have given us which we will use to buy paint, lacquer materials and equipment for the refurbishment work that’s needed.”

SDLP local election candidate Emmet Doyle welcomed news the Housing Executive has allocated £20,000 to the Bogside Artists to restore four of the murals in The People’s Gallery Mr Doyle said it is a testament to the dedication and commitment of the artists to have secured the funding and continue to show their love of the Bogside and the people of Derry by restoring murals that attract thousands of people into the Bogside every year.

Mr Doyle said: “I am absolutely over the moon that the Bogside Artists have secured this funding from the Housing Executive. It truly is refreshing to see a public body such as the Executive investing in The People’s Gallery – a focus of pride for the people of the Bogside and the entire city. The three men that constitute the Bogside Artists, Tom Kelly, William Kelly and Kevin Hasson have put this city on the map of the art world for many years and have the support and admiration of its people for their work.”

“I have long been a supporter and admirer of the Bogside Artists and The People’s Gallery that has stood in the Bogside telling the story of our chequered history.” He added: “There are some in the city who would wish to see the gallery re-imaged but, the reality is, they attract innumerable visitors to our city; they are known worldwide and right across Derry, and they occupy a special place in the hearts and minds of our people.”

“This funding will enable the artists to restore four of the murals and bring them back to their original pristine condition. “This is welcome news for the Bogside. “We all have a duty to protect The People’s Gallery. It is about and for the people of Derry.”