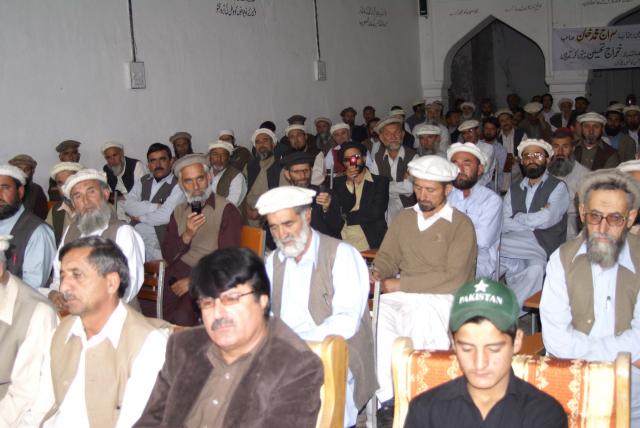 CHITRAL: Farewell party was held in honor of outgoing district education officer Chitral Haji Siraj Muhammad Khan.   A simple but prompt function was held at Government Centennial Model High school  Hall Chitral. The ceremony was started with the recitation from Holy Quran while students presented Naath Sharif in a very sweet tune. Addressing on the occasion the speakers paid rich tribute to Siraj Muhammad Khan who served here 2 years and 2 months but brought revolutionary changes in education system of Chitral. They said that he was transferred out from Chitral but people of the valley will remember him for ever. They said that earlier that so many teachers get their salary at their homes without performing any duty but Siraj Muhammad Khan not only punctuated them but also recovered a huge amount as salary from those defaulters’ teachers. They said that Siraj Muhammad Khan is a honest, hardworking and dedicated education officer who bound all teachers to perform their obligatory with honesty. He introduced cash prize incentive for best teachers as a result a large number of teachers motivated to teach their students with great enthusiasm.

Traditional gifts of Chitrali cloak and cap were also presented to outgoing education officer. The speakers said that Siraj Muhammad Khan introduced monthly test at each school so as to evaluate teachers performance and students interest in their stud as well as he regularized financial and budgetary system in education department. He adjusted 997 primary school teachers in different primary schools without following any pressure of politicians. They said that two government educational schools (Religious Madrasa) at Chitral and Drosh since 1952 but no education officer visited these religious Madaras. Hence Siraj Muhammad Khan is the only officer who noted his remarks in log book during visiting these religious schools. Addressing on the occasion Siraj Muhammad khan thanked people of Chitral for paying him due respect and hailing his services. He stressed upon the education officer and teachers to continue his mission of quality education at Chitral and must declare Chitral as a model district in education. The program was organized by all teaches coordination council. Those who spoke on the occasion were Ziauddin acting principal of GCMHS, Muhammad Ashraf president All primary Teachers Association,  Mulvi Muhammad Yousuf, Noorullah, Hafizuddin, Iftikharuddin, Sultan Mahmood, Professor Ubaidur Rehman and other teachers. A large number of teachers, social workers participated in farewell party.