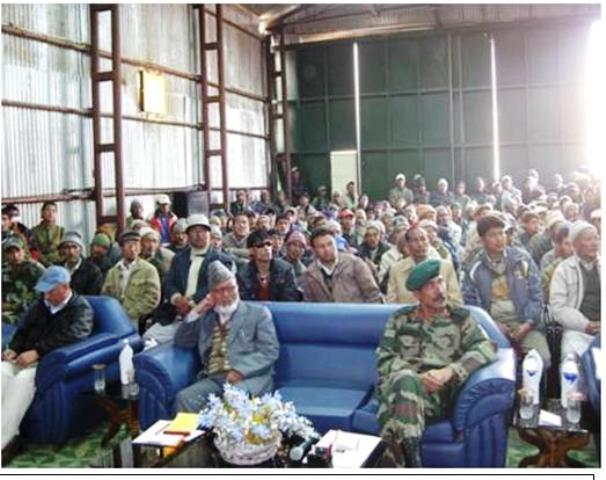 Jammu/Udhampur/Kargil, May 4 (Scoop News) – The extreme climate prevalent in Khumbathang and nearby areas does not permit locals to utilise farming techniques used in rest of the mainland.

As per delayed reports Forever in Operations Division realising the need to educate the locals, organised a kissan mela (Farmer festival ) at Khumbathang garrison as part of its ongoing Sadbhavana efforts.

Defence spokesperson  Col DK Kachari said that a group of eminent scientists headed by Dr Narender Singh, a scientist of was invited along with other scientists to explain different techniques and latest arboriculture/farming methods during extreme winter conditions. GOC 8 Mountain Division extended a warm welcome to Officiating CEC, LAHDC, other civil dignitaries and the local population present for the event. The General Officer highlighted the importance of bond between the army and civil population for developing of the area. He implored the civil population to utilise the various projects being launched by the army under Op Sadbhavana.

Honorable Haji Ghulam Amir Kamran, Officiating CEC, LAHDC addressed the mela and stressed on the locals to utilise the facility offered by the army and conveyed his appreciation to the army. He also asked the local population to extend their full support to the army and emphasised on close relationship between Jawan and Awam. Ghulam Mohd Khan, Chief Agriculture Officer, Kargil also addressed the gathering urging them to learn the techniques being explained. He thanked the army for organising the Kissan Mela for the farmers of Kargil.

The mela was a grand success as it was attended by about 500 people from the , Maji, Trespone, Saliskot, Panikher, Lankerchey, Sankoo, Umba and Pherona besides a large number of civil dignitaries. Seeds pertaining to this area were distributed to the local populace.