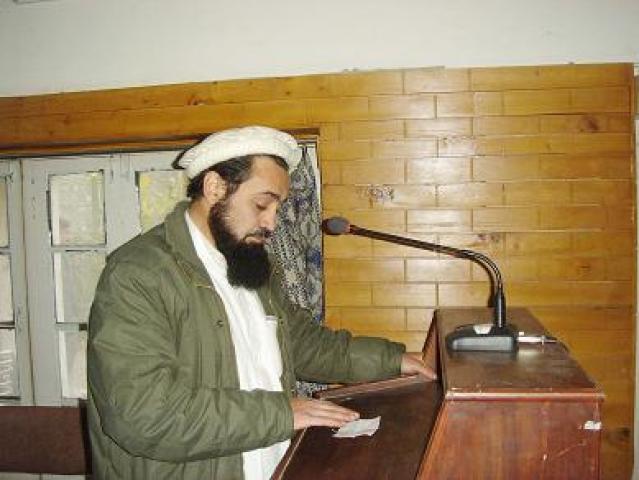 CHITRAL:  Organizers of District Seerat Conference Chitral observed martyr anniversary of Caliph  Hazrat Umar Farooq and a seminar was held at Town Hall Chitral on the day when he was martyred. Maulana Israruddin Al-Hilal Khateeb Bazar Shahi Bazar Masjid was presiding over the ceremony. Addressing on the occasion the speakers paid rich tribute to meritorious services and conquering of Hazrat Umar. They said that being ruler of a big Islamic state he was visiting during night time to ascertain and know real problems and life of common people and that is why he sends food items overnight to orphan children and depute his wife for a poor woman to support her during her delivery. They said that a large area were conquest during his time. And he was a role model as a justice, as a ruler and servant of human being. He was ruling over 2200000 square mile of land but never proud upon that and always busy in service of his people and was living with a very simple way. He never misused public asset when he was Khalifa (ruler) of Muslims. He was so simple person that during taking over charge of Baitul Muqadas the Christian demanded that to take keys of Baitul Muqadar by Khalifa Hazrat Umar. He was going on the back of a camel along with his servant riding turn by turn and when they reached near Baitul Muqadas at that time his servant was riding over the camel and Christians were really impressed by his justice.  They said that if our rulers follow principles of Hazrat Umar our country will be a symbolic country of Muslim world.
The Holy Prophet Peace Be Upon Him has offer Dua for converting in Islam one of two Umar and he embraced Islam. After his conversion towards Islam,  Muslims were more strong and they spreading and announcing of Islam openly. The speakers also demanded for celebrating birth and death anniversaries of 4 Caliphs officially like other national days. The speakers strongly condemned and lamented members of Press Club Chitral who not attended this religious gathering because they have no money to pay them and only free lance journalists came there for coverage. Those who spoke on the occasion were Maulana Khaleequzzaman Khateeb Shahi Masjid Chitral, District Khateeb Maulana Fazal Maula, Abdul Wali Advocate district chairman of PPP Sherpao group, Qari Jamal Abdul Nasir, Hafiz Nawazuddin Mujahid chairman district Seerat Conference and Maulana Israruddin Alhilal. The speakers stressed upon following of such great people whose life is a role model for Muslim Umma.
G.H. Farooqi PO Box No. 50 GPO Chitral Pakistan phone No. 03025989602, 0943-302295, 414418
Email: gulhamad@gmail.com
Filed under: Politics, World
Share Tweet Pin G Plus Email
previous article: BISP survey in progress by AKRSP
next article: 165 New cob recruited in Police