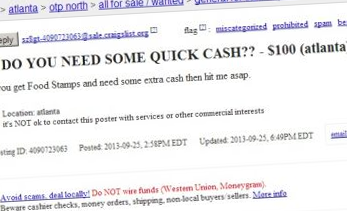 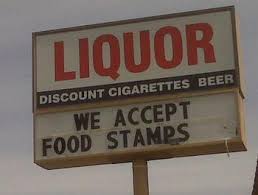 Food Stamp fraud cost everyone. Recently the USDA expanded legal definition of “trafficking” that incorporates not only the direct exchange of SNAP benefits for cash but other indirect methods of obtaining cash for SNAP benefits. The expanded definition now includes so-called “water dumping,” or the purchase of beverages in containers with returnable deposits for the sole purpose of discarding the contents and returning the containers to obtain cash refund deposits; and the sale or purchase of products originally purchased with SNAP benefits for purposes of exchanging those products for cash or other items. USDA is also seeking comment on a new proposal that would authorize USDA to immediately suspend payments to retailers suspected of flagrant trafficking violations from accepting SNAP benefits. Currently, when a retailer is suspected of trafficking, USDA must first conduct an investigation before suspending the retailer. If USDA determines that a retailer is a flagrant trafficker, the Department would be authorized to immediately suspend its redemptions. Such a step would happen concurrently with the retailer being charged; thereby allowing the Department to hold funds that might ultimately be forfeited by the store if the disqualification is upheld.
USDA has front line responsibility for overseeing and enforcing the law with respect to the more than 238,000 retailers that are authorized to accept SNAP benefits. While the vast majority of businesses participating in SNAP are honest and play by the rules, USDA continues to strengthen sanctions against those few bad actors seeking to take advantage of the program. Last year, USDA compliance analysts and investigators took action to permanently disqualify 1,387 stores for trafficking in SNAP benefits (i.e. exchanging SNAP benefits for cash) or falsifying an application. 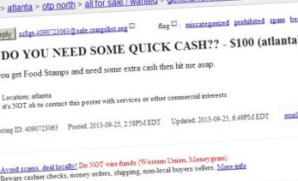 In November 2012, Ayub Yusef Eprahin, the owner of the Africa and Middle East Market  in Anchorage, Alaska, pled guilty to two counts of wire fraud and criminal forfeiture in connection with the SNAP federal food aid program that he was authorized to administer out of his store.

SNAP offers nutrition assistance to millions of eligible, low-income individuals and families and provides economic benefits to communities. SNAP is the largest program in the domestic hunger safety net. The Food and Nutrition Service works with State agencies, nutrition educators, and neighborhood and faith-based organizations to ensure that those eligible for nutrition assistance can make informed decisions about applying for the program and can access benefits.

Under the program the federal government pays the full cost of the SNAP benefits and also shares with the states some of the administrative costs through authorized stores.

SNAP program, authorized recipients are issued a certain amount of benefits each month, which they may use to purchase eligible food items. SNAP recipients typically receive their benefits in the form of a credit on their personal EBT (electronic benefit transfer ) card.

The rules of the program prohibit the purchase of items other than food, and the card benefits cannot be redeemed for cash.

In this case Eprahin and his store were authorized to accept payment for eligible purchases through SNAP.

As a participant in the program, Eprahin was allowed to receive computer issued payments based on authorized purchases made by participants who shopped in his store. As part of the scheme, Eprahin permitted non-food items to be purchased and cash to be distributed to participants in the program using SNAP benefits.

How the scheme worked:

Eprahin represented to the SNAP program that the benefits use through the EBT card were being redeemed to purchase eligible food items when in fact the purchases were not for eligible items.

Eprahin then engaged in fraud by improperly received federal program reimbursement for the ineligible items he sold and the cash he illegally distributed.

The Federal Bureau of Investigation (FBI), and United States Department of Agriculture (USDA) , who administers the SNAP program, investigated this case uncovered the fraud and busted the operation designed to exploit food stamp recipients and commit fraud against the government.

In this case Eprahin got off light under a plea deal.

According to a plea agreement, Eprahin faces a maximum of two years of imprisonment and a fine of up to $250,000. As part of his plea of guilty, Eprahin agreed to forfeit $42,489.44 to the United States as proceeds of the fraud.

Many people were outraged that the Feds didn’t seize Eprahin store, inventory and personal property, including homes and cars which he paid for in part with funds he defrauded the federal government out of under the SNAP program. The FBI and prosecutor refused specific comment on this, saying only the plea deal was proper in this case in the interest of securing a criminal conviction.

Food Stamp fraud is said to be rampant across the United States, but the Federal Government, specifically the FBI lack the resources to investigate individual cases of food stamp and retailor fraud, because they must focus on higher priority things like counter terrorism.

Oddly it is not the FBI or law enforcement charged with investigating crimes associated with SNAP – it is the USDA (United States Department of Agriculture? They are doing everything they can to combat it but the USDA is not a law enforcement agency so they often rely on the FBI and state agencies to assist and coordinate criminal investigations.

If you suspect fraud with the SNAP program you can help authorities prevent that sort of thing  by reporting it to authorities, under what is called the Integrity program.

What is Program Integrity?