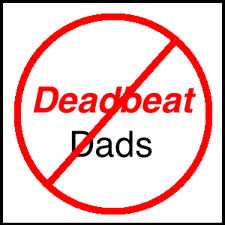 On Father’s Day it’s important to remember the hundreds of thousands of innocent, caring fathers whose lives have been destroyed by relentless federal child support systems. Divorce and family law are clearly powers of States in the US Constitution yet the Bradley Act created a vast body of divorce legislation that states are forced to adopt in order to be in compliance with Title IV of the Social Security Act and receive federal funding. Legislation put forth by New Jersey Senator Bill Bradley-D in 1986 (with Frank Lautenberg support), created an expansive and expensive federal bureaucracy that effectively federalized the Divorce Industry of America. The Bradley Amendment of 1986 mandated detailed procedures and payment network connections to collect support debt. The Bradley Amendment created one of the largest and most punishing robe-enforcement networks in the world headquartered in the Department of Health and Human Services. The Bradley Amendment turned divorce debt – child and spousal support – into a new class of super-debt that can’t be modified by any court for any reason and is collectible via a vast robo-enforcement network. There’s a federal office of child support enforcement within HHS just to maintain this system.

The Bradley Amendment robo-enforcement network relentlessly pursues parents with arrears over $2,500 with lien, up to 65% wage garnishment, revocation of passport, professional and drivers license suspension, asset seizure, tax refund and lottery intercept and more to come. Any Judge in any town in America has tremendous power knowing that his or her rulings will be enforced by one of the most expansive and powerful federal enforcement networks in the country.

To victims of the child collection network it’s one of the most insidious collection systems imaginable. Each state system is inter-connected to federal and state tax systems, payroll systems such as ADP, banking systems with multiple payment networks (transfer, debit card and check), court systems, credit bureaus and much more. It’s all set up so that as soon as a parent is $2,500 in debt and find themselves in the system they will be pursued for life regardless of the nature of the debt until it’s paid off – and after the debt is paid. Why the debt was accrued is irrelevant.

The gut reaction for many is ‘screw the dead-beats.’ ‘If you never accrued arrears in the first place, or you never got divorced you’d never have these problems.’ This is an easy defense of the system but does the premise hold up under scrutiny? The system treats those that sought divorce and those that didn’t equally so even if you didn’t want to get divorced you could still be a victim of this massive federal enforcement network. Whether a person accrues arrears due to deliberate avoidance, health problems, layoff, business failure, accident, business cycle or even being taken hostage, arrears will accrue and be subject to robo-collection. All cases are treated equally by the system and there is no chance to appeal to the federal government who runs the system from within HHS. There is no statute of limitations and a parent can find themselves in the system without ever knowing they had arrears. Once you are in the system there’s no getting out until you are paid in full and local courts report your debt satisfaction, regardless of the feasibility of payments. The debt survives bankruptcy, incarceration, hospitalization and death.

Of course there are parents who willfully avoid paying child support, spousal support and equitable distribution awards, however, the federal government computer systems that pursues Americans has no way to know who’s willfully violating their responsibilities and who has impossible obligations. The Congressional Research Report on the bill by Douglas Reid Weimer points out that it’s the parent’s obligation to seek a hasty modification to avoid arrears, however, timely changes to support orders are impossible in most states. The minimum waiting period for an adjustment can be two or more years in many states which is long enough to accrue life altering arrears for many parents who suffer setbacks.

The result is that millions of parents in the US are relentlessly pursued by a vast network of robo-enforcement that is relentless. Even if you’re currently paying support and working through arrears accrued due to normal circumstance enforcement actions ensue.

Once you are in the crosshairs of the robo-enforcers forget about passing credit checks as your debt is reported to every credit agency, but that’s only where the problems begin.

A 65% net wage garnishment is common in many states which can wipe out financial independence. A 65% garnishment combined with state and local taxes and mandatory insurances is about an 85% tax for many. With a 65% wage garnishment in high tax state like New York a person making $100,000 will be living on about $18,000 a year after garnishment and insurances.

Additionally the delinquent parent will lose their passport and can be subject to loss of drivers and professional licenses. Liens are filed and everyone you’ve ever dealt with financially can get copious details of your life mailed to them by the robo-enforcement network.

Long-term severe wage garnishment is terrible for families. Responsible non-custodial parents become bitter and therefore become worse parents if they are paying significant support sums but are still pursued by the robo-enforcers. Many NCP’s lose their financial independence and are forced to live in sub-optimal housing situations. Suboptimal living arrangements reduce the safety, quality and quantity of visitation and ultimately alienate children from parents when there’s inadequate housing.

Vast federally mandated robo-enforcers benefit some, but they also hurt many innocent parents who hit financial troubles. The Bradley Amendment has extensive requirements for payment systems but it has no facility for parents to appeal their cases directly to the federal government, which is the true enforcer of support arrears. The sole remedy for parents being wrongly pursued is via local courts which are expensive, unpredictable and inaccessible to many low-income parents. There’s no way to appeal to HHS who oversees the system directly when obvious flaws arise and there’s no urgency in local government to fix collection errors. Most people, including those who work in the Child Support Collection industry don’t understand what the Bradley Amendment is nor do they understand the weight of support super-debts so there’s no urgency to take parents out of the robo-enforcement system.

The Bradley Amendment built a massive federal bureaucracy that is punishing millions of responsible parents as criminals without the rights of due process. With no tests to determine bad parents from responsible ones, no emergency appeal system and a no-compromise approach to support debt the system has as many failures as successes. Surprisingly though, Congress wants to build even more powers into the robo-enforcement networks with the Strengthen and Vitalize Child Support Enforcement Act (S.508) sponsored by Senator Menendez, D-NJ and Senator Grassly R-IA.

If you read the press release from the bills co-sponsor Senator Grassly, R-IA on March 8, 2013 it’s clear that the Bradley Amendment is chasing many innocent parents. Is building a bigger and more expensive payment network and federal bureaucracy the way to fix the problem of support arrears?

This excerpt from the press release shows that 38% of parents had support debt in 2009 that couldn’t be collected. That’s over $14 billion that the system was pursuing in 2009 that couldn’t be collected. This is a very large number and there needs to be questions asked about the nature of the debt before the federal government builds even more power robo-enforcement systems. While the the Bradley Amendment and the SAVE act specify complicated computer enforcement systems neither mandate an appeal process that states must follow.

It’s typical of the Federal Government to build bigger systems and spend more money on broken program to solve problems, as Senators Menendez and Grassly want to do, but a bigger gun doesn’t always win the war. This is true in defense and it’s true in child support. Senators Menendez and Grassly want to give the robo-enforcers and HHS more power and more reach but they offer no analysis as to why building more complex payment systems and HHS bureaucracy will increase support compliance considering the myriad reasons that put parents into the system.
The US already has some of the strongest child support collection systems in the world so I find it very interesting the level of congressional sponsorship that child support collection receives over other pressing issues. The Bradley Act essentially federalized divorce and the SAVE act hopes to introduce further federal regulations for States to follow, bigger computer systems to build and more HHS budget. However, the bill offers no analysis of how further robo-enforcement tactics will increase the efficacy of the legislation that’s already on the books.
There are serious issues in divorce that should be addressed on a federal level prior to strengthening the power of robo-enforcers. Foremost is child custody . Custody is a circus in many states with no right to jury, representation or due process. Children are held for ransom to court-appointed professionals and custody becomes a war of attrition in many states. Secretive and ineffective judicial supervision of divorce courts makes these courts a bastion for fraud and conflicted business practices. These are easy issues to attack and should be the focus of federal regulation, not further investment in robo-enforcement systems.

Somehow with all these big issues to tackle the only issue that’s getting to the Senate floor is building bigger payment networks. Therefore it should come as no surprise that lobbying power behind these initiatives comes from the payment networks themselves. The largest and only registered lobbying group for the S.508 is the National Child Support Enforcement Association. A quick check of the NCSEA (www.ncsea.org) event sponsors, speakers and board members show that payment service providers provide the vast majority of support to this group. The NCSEA sponsors a broad range of legislative issues relating to strengthening the child support enforcement network which makes sense when you look at the legislation through the eyes of a payment processors and consultants like Maximus, Xerox, ADP, Deloitte and others.

The truth is that payment networks are funding very expensive lobbying efforts for even larger enforcement systems without looking at the problems that lead parents to this situation. Rather than looking at the problem of caring, paying and responsible parents being punished into long term financial ruin the payment networks simply want to build bigger payment networks. The NCSEA lobbying is very expensive and only payment networks and consultants can afford this type of representation, certainly parents who’ve been ruined by robo-enforcers can’t fund this type of representation. It’s no wonder that New Jersey Senators, Bob Menendez for SAVE and Bill Bradley for his eponymous amendment, sponsor legislation that expands payment networks considering the presence of ADP and other processors in New Jersey. Senator Lautenberg was the CEO of ADP, the largest payroll provider in the US with one of the largest payment networks in the world. Clearly payment providers like Maximus, ADP, Xerox and others are getting their voices heard in Congress to build bigger payment networks but responsible parents and families aren’t getting an equal voice.
No one can argue that child support enforcement is a major issue and is critical to the development of children into functional adults. However, the US Constitution is clear that divorce is the realm of states and the federal government has overstepped its bounds in support collection. Any system that creates criminals out of hard working, responsible parents who faced normal life circumstances needs to be carefully evaluated. Our Federal Government should not be in the business of ruining the lives of innocents and it’s time seriously question why the payment networks are getting such a loud voice in Congress at the expense of families and children.