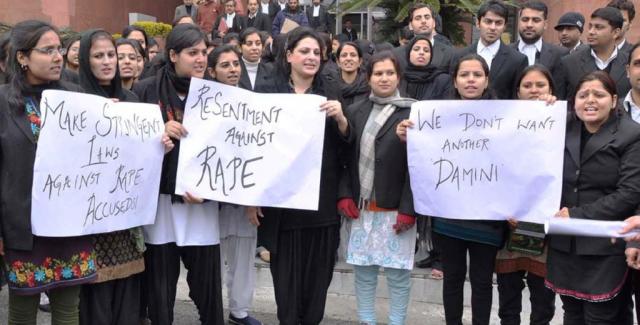 Jammu, January 02 (Scoop News) –Taking the lead the female practicing advocates of Jammu and Kashmir High Court, Jammu today took out a protest rally, under the leadership of Suman Mala Senior advocate against the rising Crime against the females throughout the country especially in Jammu and slogans were raised in rally in honour of the victim of Delhi gang rape and the protesters demanded extreme penalty for the crime who for those have committed this inhumane and dastardly act.
The protesters highlighted their resolve to fight for the rights of the victims of Crime against women and to ensure creation of atmosphere of safety and security of the society. More than 100 Female lawyers participated in the rally with equal number of their male counterpart joined the rally.
The protest rally started from the High court complex and after covering district court complex it finally ended at the main road of janipur. the protesters were carring banners demanding justice for the gang rape victim, creation of fast track courts, amendment in law by the parliament and state legislatures so that stringent punishment should be awarded to the culprits who commits such inhumane acts. At the main chowk the protesters were addressed by a number of lawyers.
The prominent female advocates who participated in the rally are Surinder kour, Sumar Mala,  Prabjot, Uphsana, Rozina Afzal, Sindhu Sharma, Anshuja, Hancy Maini, Megha Amla, Anuradha , Meenakshi, Shaila Rafiqi, Shevata, Kahkeshan, Shrishti, Vijay Angral,Monika Kohli Jyoti,Sunila Kumari,Deepali Arora,Anju, Garima, Monika Kohli ,Veenu Gupta and others.