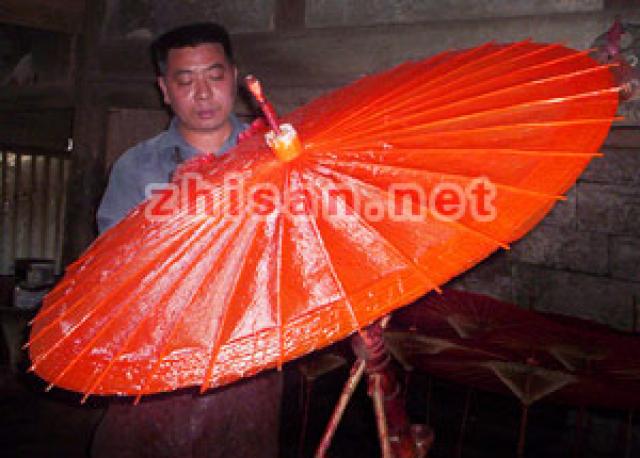 The Fenshui oil paper umbrella was originated at the end of Ming ,the beginning of Qing Dynasty,with a long history of over four hundred years.It is the only handicraft industry adopting the traditional raw material:Tong oil,lithography,bamboo,fine paper,and was once covered by CCTV(china central TV) as Live Fossil in Chinese umbrella circle as well as non-substance cultural heritage at state level.

The skeleton of the umbrella is made from fine quality bamboo growing in deep mountains at an altitude of over 800 meters,characterized by fine quality of flexibility and elasticity,is especially processed against mildew and moth.The skeleton is covered with hand-made paper on which is printed with drgon,phoenix,peacock,fairy lady,butterflies according chinese traditional folktale.The coloful pictures look rather life-like and remain the same when even exposing to rain and sunshine.It indeed a perfect handicraft for indoor decoration with its rich chinese folkways.

So far,the umbrella has been sold overseas for over such ten countries as France,Britain,Germany,Singerpore,Malayia,U.S,Japan,very popular among Poeple.