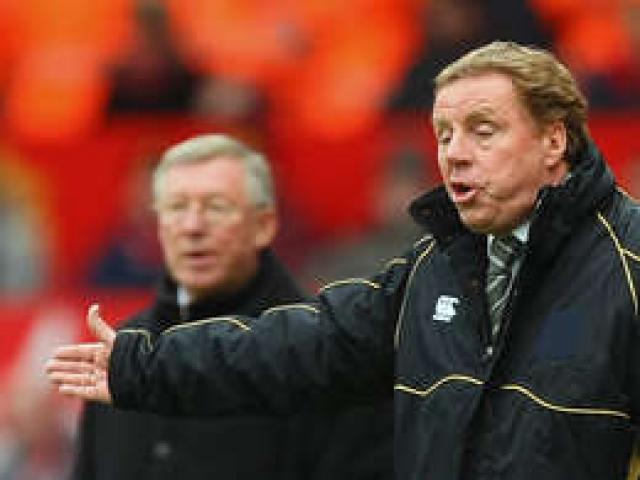 The two old pals do battle again at White Hart Lane tomorrow when Manchester United look for a win that would send them off to Japan and their tilt at the Club World Cup in jubilant mood.

Ferguson is acutely aware his side’s task is far harder than it would have been a couple of months ago, when Tottenham were languishing in the relegation zone and chairman Daniel Levy decided the situation was not going to improve under Juande Ramos.

The call went out to Redknapp, who immediately set about performing one of his famous miracle recovery acts.

Although the job is not complete yet, the signs are encouraging for Spurs, who have lost just two of their last 12 games in all competitions.

And it is easy for Ferguson to spot where Redknapp has had the most telling impact.

"That comes from the experience he has brought to the team."

While Portsmouth were not happy to lose Redknapp, and the man himself has admitted the daily trip to the capital from his beloved south coast home is arduous at times, Tottenham were just too big to turn down at this stage in his career.

Having already rejected their overtures once and then snubbed Newcastle, another offer from one of England’s true giants was unlikely to come again if Redknapp had said no a third time.

"Harry had that good spell at West Ham, which is a big club in the London area," observed Ferguson.

"He could have gone to Newcastle last year but the fact he is from the south coast and is comfortable where he lives made Tottenham far more attractive.

"They have certainly done exceptionally well since he went there."

Redknapp’s management skills mean Ferguson would have been wary tomorrow even without a quartet of key injuries that could wreck United’s plans.

Rio Ferdinand is almost certain to miss out after suffering a back spasm during Wednesday’s Champions League draw with Aalborg.

Cristiano Ronaldo, who has been officially nominated for the FIFA world player of the year award he is expected to win next month, is still troubled by a hip injury picked up against Sunderland last week.

In addition, former Tottenham duo Dimitar Berbatov, who left in acrimonious circumstances on deadline-day for a club record £30.75million, and Michael Carrick are struggling with Achilles and thigh problems respectively.

If that was not bad enough, Patrice Evra and Wayne Rooney are also suspended after amassing five bookings.

Rooney might be glad of some time out of the limelight after dominating the headlines for a couple of flashpoints in midweek that UEFA will not analyse fully until Monday.

Aalborg’s players have not been backwards in offering an opinion, especially about a stamp on Kasper Risgard that referee Laurent Duhamel missed at the time.

Risgard claimed Rooney apologised after the final whistle, with some team-mates more condemnatory in their assessment.

Not for the first time, Ferguson feels a media generated storm is brewing against his young striker.

"I am not going to discuss Wayne Rooney," he said.

"You press guys have created most of it. You are not getting anything from this club at all on Wayne Rooney. That is it, finished."

Unfortunately, it might not be the end of the matter if UEFA decide to bring a charge that would risk the England international being banned for the knock-out phase when the Champions League resumes in February.