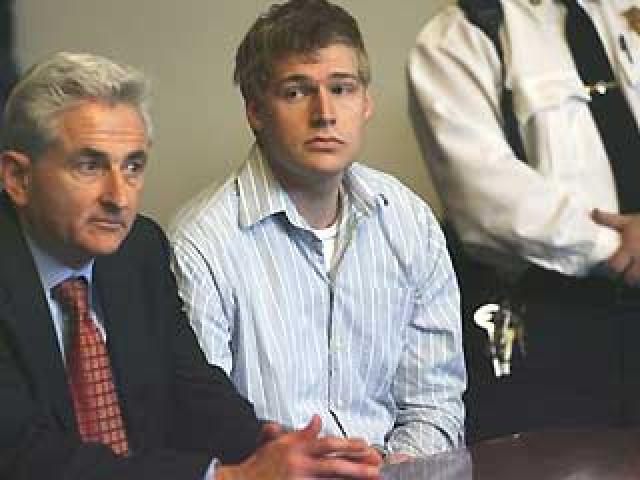 Markoff, 23, is charged with killing a New York City masseuse during a botched robbery attempt.

McAllister described Markoff as a "loving and caring person" and said she expected to talk to investigators within the next several days.

She asked that her fiancé’s fate not be determined by the media and public opinion.

"What has been portrayed and leaked to the media is not the Philip Markoff that I know," McAllister said. "To me and my family, he is a loving and caring person and in the eyes of the law and Constitution, he is innocent until proven guilty beyond a reasonable doubt.

"I just can only hope that the criminal justice system will not be overwhelmed and persuaded by what is being put forth in the media. My fiancé’s fate should not rest in the court of public opinion, but rather in a court of law."

She did not make reference to the wedding, and it was unclear whether cancellation of the band means the wedding is delayed or off.

The Bstreetband, a Bruce Springsteen tribute band, had been scheduled to play at the New Jersey oceanside wedding Aug 14. But now, the band is available for another gig on that date, according to its Web site.

"Due to circumstances beyond our control, this date is now available to book," says a blurb on its performance schedule.

William Forte, the keyboardist and owner of the Bstreetband, said a relative of McAllister called him and said "that as of right now, there is no way they will be able to have the Aug. 14 wedding date."

Forte said he planned to return the couple’s $500 deposit.

"Under the circumstances, I would never hold them to the contract," Forte said.

Markoff was a second-year medical student at Boston University when he was arrested last week during a traffic stop as he drove to Foxwoods Casino in Connecticut. He is charged with murdering Brisman, a New York City resident, on April 14 at the Boston Marriott Copley Place hotel.

He also is charged in a robbery at a nearby hotel of another masseuse police say he met through the Craigslist classified ads Web site.

He has pleaded not guilty.

Authorities continue to investigate Markoff to determine whether there are other possible charges.

A law enforcement official said Friday that Markoff’s fingerprint was found on a wall of the Holiday Inn Express in Warwick, R.I., where a stripper from Las Vegas has said she was tied up and held at gunpoint by a man she met through the site.

The official spoke on condition of anonymity because he was not authorized to discuss the case.

The official also said Markoff sent text messages from the hotel but said he didn’t have information about what he said or to whom he wrote. Markoff has not been charged in Rhode Island.

According to court papers, Markoff owes $130,000 in student loans, which is not unusual for a medical student.

He does not get money from his parents and has been unemployed for a while making him eligible for an appointed attorney paid through public funds, court documents show.

"(Markoff) stated he did not receive financial support from his family," said an April 23 document signed by a probation officer. "(Markoff) further stated he was unemployed for a lengthy period of time and was essentially living off student loans in the amount of $130,000.

The fiancée of the accused "Craigslist Killer" said she still loves him but intends to cooperate with prosecutors in the investigation.

Meanwhile, the band hired to perform at the August wedding of Megan McAllister and Philip Markoff says it’s been told it won’t be needed.

"In the past two short weeks, my life and what I hoped my life to be has dramatically changed," McAllister, 25, said in a statement. "I want to thank my family and my friends who have supported me during this very difficult time. Without them, I do not know how I could make it through this nightmare. I hope they know that I love each and every one of them.

"I also love my fiancé, and I will continue to support him throughout this legal process."