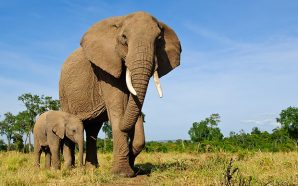 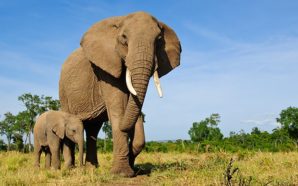 Kenya has taken measures in a war against elephant poaching through improving enforcement action, higher penalties and creation of awareness to members of the public about the impact of poaching to the country.

This has saw government, organisations and ordinary Kenyans launching several anti-poaching campaigns to save the jumbo from extinction.

According to a USAID-funded report by TRAFFIC, a global non-governmental organization working on trade in wild animals and plants, Kenya is stilling act

This comes as Kenya was reported as the only country in Africa to report a major decrease in the numbers poaching last year.

According to the director of Kenya’s wildlife service, Kitili Mbathi, Kenya’s poaching trend has gone down because of tough anti-poaching policies but changing poaching tactics are still threating the industry.

phants” together with Executive Director of Elephant neighbours Centre Jim.
The walk aimed to create awareness about the value of elephants and rhino and reduce human-elephant conflict and promote anti-poaching activities.

The First Lady said it is encouraging that ordinary people are spearheading wildlife conservation efforts and commended Jim Nyamu, the executive director of Elephant Neighbours Centre, who is behind the new initiative to protect elephants and rhinos, to boost peaceful co-existence in the ecosystems to reduce human-wildlife conflicts.

She stated that individual and collective efforts will play a critical role in eradicating elephant poaching and ivory trade in the entire East African Community. 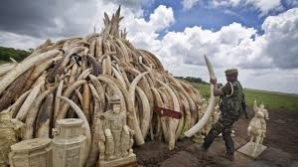 President Uhuru Kenyatta led the burning of 105 tonnes of elephant ivory and 1.35 tonnes of rhino horn which he described as sending a message to the world about Kenya’s commitment to end   poaching. The country plans to propose a total ban on illegal ivory trade later this year.

According to Kenya Wildlife Service Director General Kitili Mbathi, the government decided to burn to make the ivory beyond economic use.

Another effort by the world to end illegal poaching is the anti-poaching ‘hearts and minds’ campaign spearheaded by Oscar-winning actress LupitaNyong’o, afro-pop band Sauti Sol and radio personality Caroline Mutoko.

The campaign focus on elephants as threatened species.

“Many of us know about the poaching crisis, but too many assume the government or a conservation group will take care of it”, said Daudi Sumba, Vice President of Program Design AWF.

“If we lose our elephants, it will not be because we lacked the knowledge or tools to save them, but because we all failed to take ownership of our wildlife heritage. None of us can afford to be bystanders when so much is at stake,” he added.

2015 campaign survey of 2,000 Kenyans show that more than 96% said wildlife was important for national identity, heritage and the economy with only 13 % stating they didn’t care about wildlife.

21 % said wildlife was a nuisance while 28% said poaching didn’t affect them in any way.

A further, 87 per cent said the government should do more about poaching, and 75 per cent said losing elephants would matter to them a great deal. There was little difference between urban and rural Kenyans.

According to conservationists, elephant population in 1970 was at 167,000. The numbers stand at 26,400 elephants in Kenya today.

“We hope that this will extend greater protection to animals like pangolins and vultures that are not as charismatic as elephants and rhinos,” he added.

In combating elephant poaching, KWS has put up several measures to curb elephant poaching. These include deploying detection dogs to seaports and airports and strengthening the country’s wildlife laws and penalties.

The measures saw numbers of poached elephants reduce from 384 in 2012 to 93 in 2015 and rhino poaching has declined as a result of intensive protection efforts.

However, AWF and WildAid warn that poaching is still a threat as long as markets for ivory and other wildlife products are still in place.

Kenya has many national parks and national reserves which are home to tens of thousands of elephants and thousands of rhinoceros.

Most popular tourist destinations in the country include Amboseli, Tsavo East, and Tsavo West National Parks and Maasai Mara National Reserve which bring in hundreds of thousands of local and international tourists to Kenya each year.

KWS employs anti-poaching rangers to prevent wildlife poaching for ivory, leopard skins, and rhino with intent to smuggle the products to foreign markets.

2015 Kenyan authorities reported that government-held stockpiles were in possession of 25,052 pieces of ivory weighing 137,679 kg which included raw elephant ivory from elephants that have died of natural and unnatural causes.

2013 annual report the Kenya Wildlife Service reported that 302 elephants were lost to poaching that year with census cited in the report showing elephant populations steadily growing and in 2013 had reached 1,940 individuals.

How poachers are using new method where they use poisoned arrows to kill elephants.

In 2014, a poison-tipped arrow was used to kill Torn Ear, a well-known Kenyan elephant and Satao another of Kenya’s most beloved elephants was killed by a poisoned arrow by poachers.

China Kenyan ivory is not smuggled to China, Asia, the Middle East, Europe and the USA.

In playing its part in reducing ivory trade from elephants, China has establish extremely stringent laws against the illegal trade in ivory and the penalties for the culprits.

These include adding the African elephant to the list of the “first-class wildlife under special state protection” to ensure ivory and its products are controlled by the law.

The Chinese Government has set up a database information system on all ivory products to ensure no illegal ivory enters the market and regular inspections and examinations of ivory stockpiles.

China has also imposed a one-year ban on ivory imports amid criticism that china citizens’ huge appetite for ivory threatens the existence of Africa’s elephants.

On the other hand, the United States Fish and Wildlife Service passed a rule to enforce a ban on elephant ivory trade to restrict wildlife trafficking.

It limits imports, exports and sales of African elephant ivory in the USA.

However, the rule is limited to African elephant ivory not ivory and bone from other animals.

US Secretary of the Interior Sally Jewell and co-chair of Obama’s Task Force on Wildlife Trafficking said the action show the United States’ commitment to end poaching.