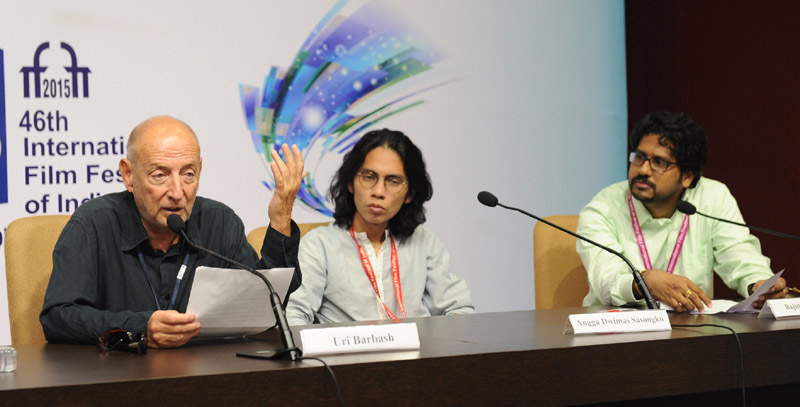 The Directors, Uri Barbash (Israel) and Angga Dwimas Sasongko (Indonesia) at a press conference, during the 46th International Film Festival of India (IFFI-2015), in Panaji, Goa on November 27, 2015.

In India, Films Are Appreciated And Given Due Respect: Angga Dwimas Sasongko

Panaji (PIB-GR-TYP-BIN): “Film making is a social adventure and social dynamics”, said Israeli Film Director Uri Barbash. The collaborative venture behind and in front of the camera makes it both dynamic and adventurous, he said. While speaking at the “Meet the Director’ Press Conference at IFFI 2015 on November 27, Mr. Barbash said that his film Kapo in Jerusalem is an attempt to find a different poetics, a minimalist, modest way to tell the story of the survivors of Auschwitz.  He also said that for Jewish people like him, every day was a miracle as they do not take life for granted.

Quoting the lines of famous poet Theodor Adorno, the Israeli director said “making films after Auschwitz is a barbaric act.” He also commented that his film, Kapo in Jerusalem is an attempt to express the inexpressible pain of holocaust which the Jewish community lives through every day. “The pain of Holocaust is in my spiritual DNA”, he added.

Responding to a query on his experience in India, Mr. Barbash said that he was impressed with the extent of harmonious coexistence of different religions and cultures in India, especially that in Goa”

Mr. Angga Dwimas Sasongko, Filmmaker from Indonesia, who was also present at the Press Conference, narrated his experiences in making the film Filosofi Kopi. “Through the metaphor of coffee, I have tried to explore the past of a group of characters and their lives,” he said. “I travelled for one year in Indonesian villages to know about the various dimensions of coffee” he added.

Mr. Sasongko said that he received an interesting feedback from Indian viewers on his film Filosofi Kopi that they started drinking coffee instead of tea. He also added that in India, films are well appreciated and given due respect, which is not the case in his country.