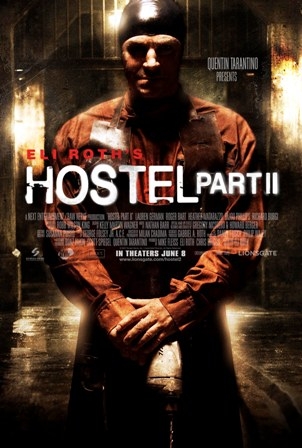 What would seem like a cliché –filled horror sequel to the original Tarantino produced hit, we end up a cliché – filled comedy. Not intentional in all departments I am sure.

Mind you,. Hostel 2 breaks out the instruments of torture again (still not sanitized) and the blood bath begins. Literally. The ingredients are there: the geek, the big mouth, the tough one and of course lots of blood, breasts and blood on breasts.

The odd squirmy scene hit home (a la The Cook, The Thief,  His Wife,…ending.) so the wince factor is  intact. Wish I could say the same for the body parts. Simple stuff plot wise, as it putters along – we can understand why director Roth had been quoted last week as saying: “There will not be a Hostel 3”. Makes perfect sense. Why ruin a bloody good thing? Not to mention we were getting Cabin Fever.