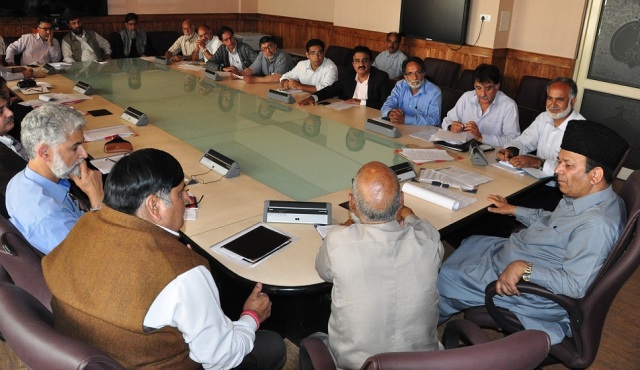 Srinagar, October 02, (Scoop News)- Reiterating that Government fully shares the concerns of the flood affected people of the State including business fraternity, the Minister for Finance and Ladakh Affairs Abdul Rahim Rather today assured that all the stakeholders would be taken on board before firming up the proposed memorandum to be sent to the Central Government for relief and rehabilitation package. He said Government will endeavour to address all the genuine concerns of the business community with positive frame of mind within the shortest possible time adding that the situation demands a collective response of the whole society to move together to deal with the unprecedented Natural Calamity.
Speaking at a joint meeting of the Senior Officers of the State Administration and representatives of the State Economic Reconstruction Forum (SERF) the highest forum of trade tourism business and industry – held at Civil Secretariat on Thursday to devise ways and means for gigantic rehabilitation task ahead in the aftermath of the flood last month in the State, Rather called for a resilient and pragmatic relief and rehabilitation Action Plan to meet the challenge of devastating rebuilding the huge basic infrastructure which has been devastated in the floods. The Minister for Finance urged the need for a mission mode to deal with the unprecedented situation in a spirit of collective responsibility keeping in view of the scale magnitude of the flood destruction that has played havoc with the economy of the State.
The State Administration was represented by the Economic Advisor to the Government. J.A. Khan, Principal Secretary to Government, B.B. Vyas, Commissioner Commercial Taxes, J&K, Kifayat Hussain Rizvi, Excise Commissioner, Zaffar Ahmad , Director General (Budget), Dr. Ishaq, Director General, Accounts & Treasuries, Altaf Hussain Mirza, Special Secretary to Government, Finance Shakeel-ul-Rehman, Director Finance Showkat Aijaz, ,Director Codes, Rafi Andrabi ,Chief Coordinator, Finance Department Ms. Risham Kashap and President, J&K Bank Mohd Amin, whereas the SERF representatives included Dr. Mubeen Shah from KCCI, Iqbal Trumboo from Kashmir Economic Alliance, Ali Mohd Shirazi from CCIK, Mohammad Asraf Mir FCIK, Mohammed Yaseen Khan, from KEA, Mohammad Aslam Mattoo from KTMF, Peerzada Fayas Ahmad from TAAK, Faiz Bakshi from J&K Tourism Alliance, Jan Mohamad Koul, from Kashmir Traders Federation, Adhil Khan from KHARA, Showkat Chandu from KEA, and Sadiq Baqal from KTMF.
The Finance Minister said the State Government is examining various relief and rehabilitation models dealing with Natural Calamities in vogue in the country so that an adequate package is hammered out for the flood affected people of the State which could be better than that of UttarKhand rehabilitation model. He said State Government has approached the Union Finance Ministry to sent a mission comprising leading International Lenders including Asian Development Bank (ADB), World Bank and GLOBAL Facility For Disaster Reduction and Recovery (GFDRR) to assist the State in rebuilding the damaged infrastructure and reviving its shattered economy. The Mission is expected to visit the State soon. He said a number of long ,medium and short term measures shall be required to rebuild the devastated economy and damaged infrastructure which could be possibly identified through much needed coordination among the stakeholders.
Rather said that the Insurance Companies have already been directed to fast track settlement of claims and submit their report card and calendar of activities to the Government on weekly basis. Similarly the banking institutions working in the State have been asked to be proactive and operationalize their branches fully with immediate effect. He said financial institutions have been asked to provide hassle free lending facility on adhoc basis to facilitate the affected businessmen to restart their business activities without any difficulty. “Following these directions, the SLBC has already initiated some measures to come to the rescue of the flood affected people and has also made some recommendations to RBI for facilitation of additional loan to the needy. He said the Sub Committee of the SLBC shall be holding an emergency meeting at Srinagar on tomorrow, the 3rd October 2024 to speed up the implementation of decisions already taken in this regard.

Filed under: News, State Government
Share Tweet Pin G Plus Email
previous article: New study confirms anti-cancer properties of neem
next article: Senators warn of wave of “fraudulents schemes” that could hurt confidence in the integrity of our financial markets