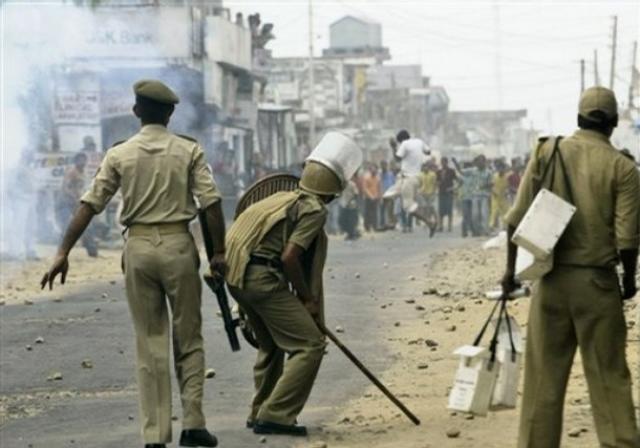 JAMMU, INDIA — The situation remained peaceful in Jammu barring sporadic incidents of street clashes with police at various places on the first day of a two-day shutdown. A peaceful shutdown was also observed in Kathua, Udhampur, Samba, Bisnah, Akhnoor and other areas of the Jammu region.

The Jammu shutdown call was given by the Shri Amarnath Yatra Sangarsh Samiti (SAYSS) to protest against police highhandedness on Saturday.The state authorities had prevented leaders of the Sangarsh Samiti from entering the premises of the Abhinav theatre to attend an homage ceremony organised to the memory of martyrs killed during the two-month-long agitation.

All the shops and business establishments remained closed and traffic remained off the road, and especially due to the Sunday holiday the majority of streets wore a deserted look.

Small groups of people, including women, came out on the streets and shouted anti -Governor slogans demanding action against the police officers responsible for the police action at Abhinav theatre.

The convenor of the sangarsh samiti, Advocate Leela Karan Sharma, on Saturday demanded immediate implementation of the agreement signed between the State Government panel and the Shri Amarnath Shrine Board last month.

According to the agreement, the shrine board will continue to discharge its duties and supervise arrangements of the pilgrimage with the State Government’s support.

It was also agreed upon that the land at Baltal and Domail would be set aside exclusively for the pilgrimage and no money will be charged for using the forestland.

Meanwhile, addressing a press conference here on Sunday Mahant Rameshwar Das alleged  police opened fire on his vehicle to execute their plot of eliminating him with an aim to trigger more unrest in Jammu.