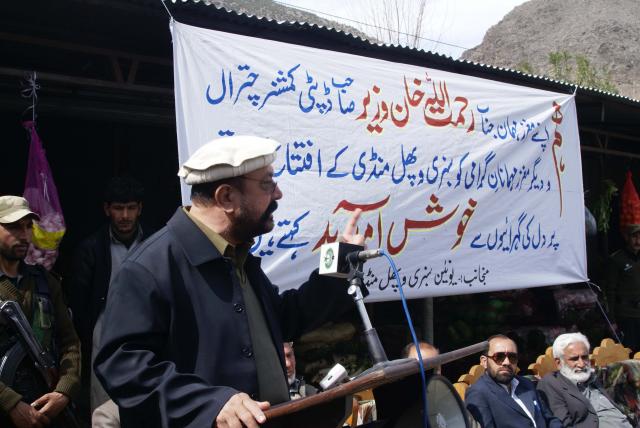 CHITRAL :  People of Chitral were facing great hardships in getting fresh  Fruit and vegetable  and its market was located on some distance from local market.  Hence a whole sale market was inaugurated for fruit and vegetable  for the first time under the  auspices of Chitral Municipal Committee from which e commodities will be supplied to the retailers on controlled prices.

On the opening ceremony Deputy commissioner  Chitral Rahmatullah Khan Wazir was chief guest who  unveiled the plaque to formally inaugurate the market near Atalique bazaar.

Speaking on the occasion DC Chitral  said that the establishment of the market was much needed since long to provide fresh vegetables and fruits and putting an end to black marketing and profiteering. He warned the profiteers of dire consequences and asked them to strictly follow the rules and price list. He also directed executive magistrates and officers of administration to strictly check prices on daily basis and take stern action against the violators.  The chief municipal officer of municipal committee Muhammad Zahir Khan said that the prices of fruits and vegetables will be fixed on daily basis in consonance with that of regional and national markets. He said that the local fruit and vegetables will also be controlled here and only the superfluous quantity will be allowed to be sent to the down districts to arrest there in the area.

Maulana Israruddin Alhilal complained of high prices of vegetable and fruit and termed it out of the reach of poor people as comparative to Dir and other districts where  its prices are very reasonable. Responding to his question Deputy commissioner said that no one would be spare who harass the poor people and stern action would be taken against the profiteers. Tehsil Municipal Officer Karimullah, Rehmat Wali and other thanked the participants who participated on  opening ceremony of new fruit and vegetable market (Sabzi Mandi). Besides other president of trade union Habib Hussain and General Secretary Haji Manzoor Qader also were present on the occasion.