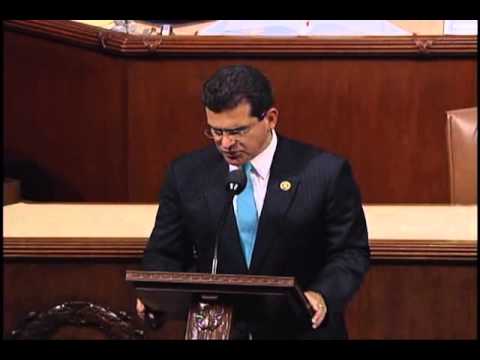 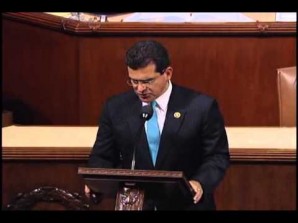 “To be sure, fiscal mismanagement at the local level and insufficient attention at the Federal level have both been factors contributing to Puerto Rico’s problems, but the record clearly establishes that they are not the main factor”, says Rep. Pierluisi.

On December 4, 2013 Rep. Pierluisi asked for and was granted permission to address the United States House of Representatives for a few minutes regarding the untenable situation in Puerto Rico.

“Mr. Speaker, over the last several months, the press has been filled with stories about the severe economic problems in the U.S. territory of Puerto Rico. These economic problems have aggravated social problems like crime, have generated anxiety for individuals and institutions that have invested in Puerto Rico’s bonds, and have caused island residents to relocate to the 50 States in unprecedented numbers.”

“The statistics are staggering. In recent years, Puerto Rico’s population has fallen by more than 4 percent, while the number of Puerto Ricans living in the States has increased by over 45 percent. As Puerto Rico’s representative in Congress, it pains me to read media accounts of the island’s troubles, especially because I know that my constituents are just as capable and industrious as their fellow citizens in any other jurisdiction. Puerto Rico has enormous potential, but the reality is that this potential is not being fulfilled”, he said.

“Although the island’s problems have certainly grown worse in recent months, it is critical for policymakers and the American public to understand that these problems are not of recent vintage. To the contrary, for at least four decades, Puerto Rico’s economic performance–and by extension, quality of life on the island–has been far worse than any State, according to every indicator, including unemployment, average household income, and the ratio of government debt to economic production. In other words, Puerto Rico’s difficulties have endured in more or less the same form, regardless of who holds power in Washington and San Juan and irrespective of the public policies they formulate”, he continued.

“To be sure, fiscal mismanagement at the local level and insufficient attention at the Federal level have both been factors contributing to Puerto Rico’s problems, but the record clearly establishes that they are not the main factor”, said Rep. Pierluisi (source: congressional Record http://thomas.loc.gov).