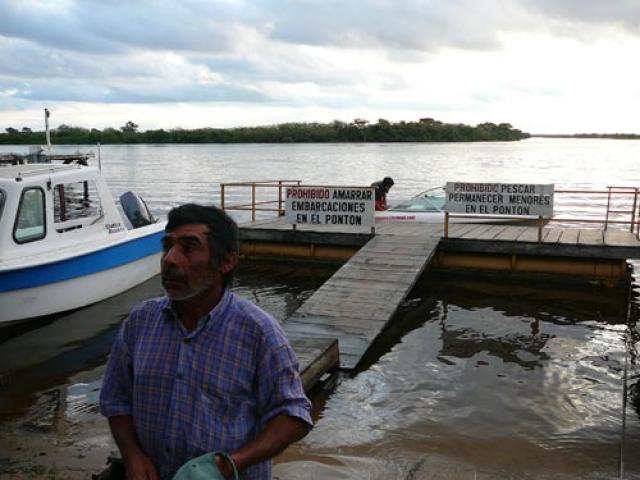 Esquina, Corrientes Provence, Argentina — Just before sunrise on the banks of the Parana River, the sky was a dark purple and the air was sweet and humid.  Rain clouds threatened from every corner.

The overnight, seven-hour bus ride from Buenos Aires, paralleling the river through Entre Rios and into Corrientes Province, while surprisingly comfortable, had left us dazed and groggy.

We’d come to Esquina because it was May Day and we had 48-hours to catch some of South America’s biggest and best-eating river fish, including the Dorado, (a golden, tasty relative of the carp), the Surubi (a sharp toothed monster with thick, meaty filets) and the Pacu.  But even if we wound up empty-handed, we told ourselves, the relaxing, purifying effect of being in such a stunningly beautiful and untrammelled place would have been worth the trip.

Having dropped off our bags at the quaint bed and breakfast which arranged our fishing expedition, La Casona de Cotota, where Juan, the timid garcon who cheerily met us at the door at 5:30 in the morning, served us a continental breakfast, we headed for the docks.

He greeted us tersely, the hallmark of a good fisherman, and we were off.

As Big as the Sea

Parana, in Tupi, a now defunct indigenous Brazilian language, means “as big as the sea.”  As Chino cut the motor and we began to drift down the middle of the120-ft-deep channel, the first of many fishing spots of the day, it became evident that Parana was no exaggeration.

If you count the Brazilian headwaters of the Paranabia, the Parana stretches some 2, 484 miles through four countries, the second in length behind the Amazon in S. America.

Chino rigged up our lines with heavy sinkers and an eel-like, four to six-inch-long live bait fish he called Moreno, and cast them carefully to avoid tangles.  We fished along the river’s bottom where the Dorado feed, so by the time we set the reel, our lines had almost completely unspooled.

Then we waited and watched.

This vast and deep body of murky water, nearly opaque from the sediment stirring from recent floods, was surrounded by lush islands and snaking tributaries that faded on all sides into the distant horizon.

A beam of rising sun broke through a hole in the clouds, fanning out over the tips of the river’s swirling wavelets.  Throughout the day, the dramatic story of the sky unfolded as clouds puffed up, dropped misty lines of rain, thinned, vanished and then returned again at sunset for the final act.

Even though we were a daunting swim from the shore, cows and horses could be heard clearly, along with their attendant herdsmen whooping and whistling.  From time to time, exotic birds shrieked like hysterical monkeys from the trees.

Fishing can be a lot like playing baseball; long periods of quiet and boredom are punctuated by brief flashes of excitement and activity.  The trick and skill lies in remaining patient yet alert for the right signals; the crack of the bat or tug of the line.

But despite Chino’s earnest efforts, and the well-intentioned complaints from some of our more gruffy companions, the best we could come up with before lunch was a spotted catfish called a manguruyú, which was thrown back in hopes of something a bit more glitzy.

We brought our boat ashore a small island far downstream and Chino set up a picnic table loaded with fresh Spanish tortillas, beef milinesas, a salad and dulce de mamon, an inky, mildly sweet sort of preserves made from a local melon.

The only vestige of human activity there was a lemon tree and a wood post coral used to count cattle, shipped on massive cargo boats from northern Argentina and Paraguay, and check for disease before they’re sent to their final port destinations downstream.

In fact, many of the islands in the Parana have ranches on them.

One particularly large one Chino pointed out he claimed had 30,000 head of cattle, horses and wild pigs.  He said that the children of the families who lived there did not attend school and that there were many others like them, growing up with the forest, the river and the farm as their classrooms.

While we ate and enjoyed the respite from the blazing midday sun, the sole fishing pole on the boat with a line out bobbed over.   It was a Palometa; a bigger, meaner version of the infamous Pirana.

Chino said that during the summer months, December through February, when tourist season is off, the Palometa were like a plague to the ranchers.  They send out a test cow before crossing any shallows, because, he said, they could devour an entire cow in about an hour.

By the end of the first day, without a fish netted, we returned wearily to Esquina, our thoughts turned towards dinner and rest.

St. Rita de Cassia Church, with its twin towers, the tallest structure in this typical provincial Argentine town of about 30,000, is visible from a great distance beyond the mouth of the harbor.

Aside from this and an oddly flash casino, there is little to do or see in Esquina at night.  The meager, overpriced leather and capiberra offerings in a few stores here can be found cheaper and better elsewhere in Argentina.

Instead, as one strolls the sleepy streets where locals sit in lawn chairs in front of their block houses, sipping mate in the twilight, the calmer, quieter pleasures of rural life make themselves evident.

A few blocks from La Casona de Cotota – whose welcoming owners, Klaus and Sarita Rohner Liebig, also operate a nearby estancia called Buena Vista, which was ranked the top estancia in Argentina for 2006 by Lugares Magazine – we found a charming and rustic restaurant straddling the river called El Aljibe.

As we inhaled our grilled surubi and homemade flan, we took in the strange display of antique Argentine weaponry and knick-knacks cluttered on the restaurant walls.

Still tipsy with the residual sensation of floating all day in a boat, we turned in early, optimistic about the next day’s fortunes.

Finally, late the next morning, Chino having carried us far up a tributary that wound dreamily between nameless islands and estuaries filled with lily pads, to a place reminiscent of the land before time, we gaffed our first Dorado.

Known as “the tiger of the river,” the Dorado at first biting feels surprisingly soft on the line.  If you’re not careful, you could easily mistake it for the bait bouncing along the bottom.

But after a few furious tugs trying to hook the thing – the mouth of the Dorado is as hard as a hammer – it’s all fight.  The second Dorado, about eight pounds, leapt from the water like an angry tuna.

Chino, ever stoic, even cracked a smile, for a second.  We worked this spot for as long as we could, until we were dizzy from the midday sun and satisfied with our catch.

Finally, we dropped off at the dock, left our fish to be cleaned and put on ice to take back home.  The trip had left us exhausted but satisfied, with just the right amount of action and boredom to make us want to return again, in search of the ones that got away.