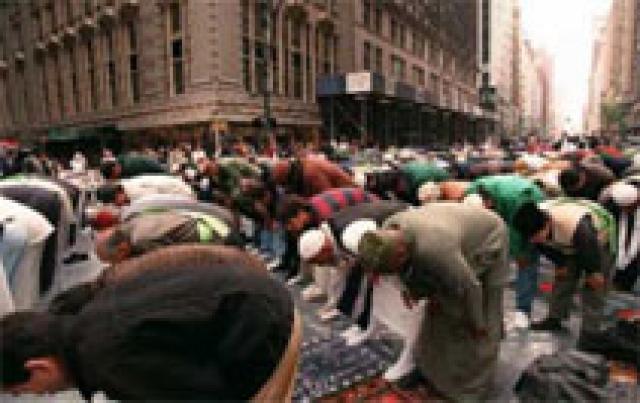 Salah is the name for the obligatory prayers that are performed five times a day, and are a direct link between the worshipper and God. There is no hierarchical authority in Islam and there are no priests. Prayers are led by a learned person who knows the Qur’an and is generally chosen by the congregation.

These five prescribed prayers contain verses from the Qur’an, and are said in Arabic, the  language of the Revelation. Personal supplications, however, can be  offered in one’s own language and at any time.

Although it is preferable to worship together in a mosque, a Muslim may  pray almost anywhere, such as in fields, offices, factories and universities. Oftentimes visitors to the Muslim world are struck by the centrality of prayers in daily life.

According to a saying of Prophet Muhammad (peace be on him), prayer is a deciding boundary between Belief and Unbelief.The Prophet compared this experience of making ablution and praying five times a day to having a river running in front of one’s house. If one bathed in that river five times a day, would any filth remain on his body? Likewise, the ablution and Prayer five times a day removes one’s sins and also prevents him from sinning.

Five times a day a Muslim is asked to stop whatever he is doing — be it sleep, work, or play — and make a ritual ablution before facing his Lord in Prayer. No matter what his actions, the most important thing to a Muslim is his relationship with Allah. This relationship is demonstrated and put into practice, as well as improved and increased, by the ritual Prayers. Only if the Prayers are sound and proper will the deeds be sound and proper.

In the Prayer, the Muslim faces towards the Ka‘bah in Makkah, the symbol of the Oneness of Allah and the unity of Muslims. He stands, bows, and prostrates to his Lord while praising Him, reciting some of the words He revealed in the Qur’an, and asking for His forgiveness and mercy. In doing so, the Muslim reminds himself of his position in the universe as a humble servant of Allah and of his total dependence on his Creator, Cherisher and Sustainer.

When the Prayer is performed properly — with due humility and remembrance of Allah — it has a lasting effect on the person. It fills his heart with the remembrance of Allah, and with fear of and hope in Him. He will not want to move from that lofty position by disobeying Allah.

Prayers also affect the life of the Muslim by encouraging him to schedule his activities around their fixed times. There is some flexibility, for each time is actually a span of one hour or more. But the Muslim who is conscious of Allah will strive to schedule his life in such a way that he does not miss any of the Prayers — for example, by postponing a shopping trip until after a Prayer, or by taking a break from work, or by sleeping earlier so as to able to rise for the Dawn Prayer.

The following verses from the Holy Quran describe the expected behavior in prayer and ask for the rememberance of God. There is a strong warning to those who pray to show off.

007.205 And do thou Bring thy Lord to remembrance in thy (very) soul, with humility and in reverence, without loudness in words, in the mornings and evenings; and be not thou of those who are unheedful.
So woe to the worshippers. Who are neglectful of their prayers,  Those who (want but) to be seen (of men), But refuse (to supply) (even) neighbourly needs. (The Quran, 107:4-7)

A believer should submit himself or herself completely in the service of God, as stated below:

Say: "Verily, my Lord hath guided me to a way that is straight,- a religion of right,- the path (trod) by Abraham the true in Faith, and he (certainly) joined not gods with God." Say: "Truly, my prayer and my service of sacrifice, my life and my death, are (all) for God, the Cherisher of the Worlds: No partner hath He: this am I commanded, and I am the first of those who bow to His will. (The Holy Quran, 6:161-163)