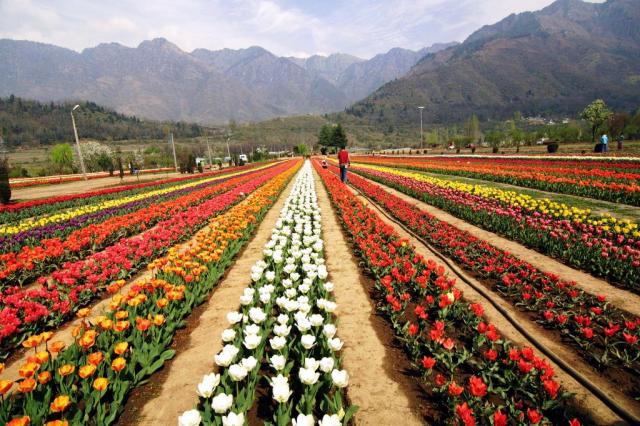 Srinagar, May 15 (Scoop News) –Underscoring the need to fully utilise and exploit the huge Floriculture potential of Jammu and Kashmir, Minister for Floriculture, Haj, Auqaf and Public Enterprises Peerzada Mohammad Sayeed asked the concerned to sensitise the youth regarding the scope and benefits of various Government schemes meant to boost Floriculture sector.

This was stated by the Minister while chairing a meeting convened to review the functioning of Floriculture Department here today.

Addressing the meeting, the Minister said over 70 per cent population of the state is living in rural areas and depends directly on agriculture.  He asked the concerned to sensitize the rural populace about the importance of this sector and its huge market potential that they could benefit from, if they adopt floral industry on commercial lines. He said owing to the availability of different eco-climatic zones suitable for growing flowers, there is cent per cent guarantee that this sector can flourish in the State.

Highlighting the importance of floriculture industry, the Minister said that this industry is a fast growing industry which has achieved a tremendous growth during the past several decades and has extended its ambit worldwide. He said that commercial floriculture has emerged as a high-tech activity taking place even under unfavourable climatic conditions by utilising controlled conditions in green houses.

Peerzada said that the State is ideally suited for the development of flowers, bulbs and the seeds throughout the year. He said earlier the floriculture activities were restricted only to maintenance and development of parks and gardens. He said that now this sector has assumed greater significance due to its greater employment and income generation potential especially in tourism sector as flowers have great demand in the country and world as well.

The Minister directed the concerned for rationalization of available manpower in the department for the smooth and effective functioning of the department.

Peerzada directed the concerned for giving added face-lift to Mughal Gardens, Chashma Shahi and other important gardens in view of the  international event “Concert for Peace” to be organised in the Month of September in which world renowned musicians are likely to participate.

Peerzada said that the government has taken various projects in hand for the development of Kokernag area to promote it as one of the most favoured tourist destinations of the state. He said that Dandipora Park on Simthan-Kishtwar road would be developed as an all season park. He also directed for formulation of projects for development of Margan top, Choharnag, Simthan top, Mawarnag Lake and Matiwedian park near Desu junction.