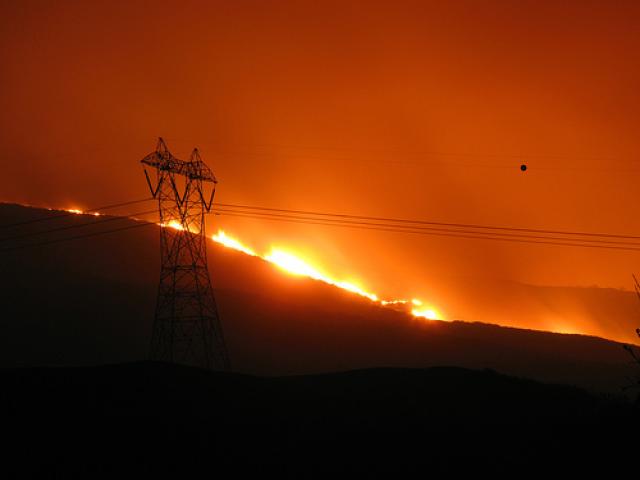 PALM BAY, FLORIDA–Police are more and more coming to believe that the nine separate raging central Florida wildfires that at the time of this writing have already cost over 100 homes were the work of an arsonist, and the hunt for the suspected guilty party is already being undertaken by six detectives.

The wildfires ignited and began to spread within mere hours of each other, a tell-tale sign of deliberate work.

Palm Bay Fire Marshal Mike Couture said that the wind-whipped flames have mostly been contained after burning over 3500 acres across the central Atlantic coastal part of the state.

Florida governor Charlie Christ has issued a state of emergency declaration so that Florida can receive federal government funding to help pay for clean-up and eventual rebuilding.

Palm Bay and neighboring town Malabar have been heavily damaged by the fires.

"Every time I turn around another house is on fire. We don’t have enough resources on our own to do a job like this," said Palm Bay spokeswoman Yvonne Martinez as the firefighters were deeply into the second full day of staving off the advance of the flames while some residents tried to do the same by taking garden hoses to their homes’ roofs and outside walls.

Butch Vanfleet of Malabar, who built his home there in 1980, said of his home, "All you see is nothing but ash…There’s no grass. The fire just came so quickly, we barely got out of there."

One eye witness who has contacted police with a possible lead on the arsonists said they saw someone drop off something in an open field in Palm Bay only shortly before a fire blazed up in that area.

Fire-fighters and police were questioned by some as to why someone would want to do this. They responded that arson gives a "sick thrill" to some people who have inner personal issues of some kind or other.

However, according to Orlando Dominguez, Brevard County Fire Department PIO, "It is quite suspicious because there have been no lightening strikes in the past few days, but that doesn’t mean fire was intentially set. It could be dry conditions or a cigarette out a window. Right now our primary focus is containing the fire, and then our focus will be on what started the fire."

Filed under: Lifestyle, US
Share Tweet Pin G Plus Email
previous article: Robert Rauschenberg Dies at 82
next article: BTRC yet to get a passing grade – Do ‘your job’ that is mandated for you