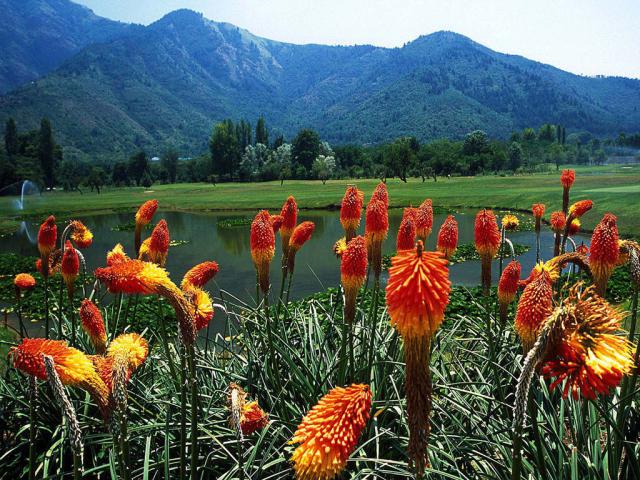 The vale of Kashmir , famously known world over as a basket of flowers is catching up rapidly with production of flowers for commercial purposes as well. New and existing varieties of flowers having tremendous overseas and local market are being cultivated in various parts of this beautiful valley for bringing in prosperity for the farmers. With new industries coming up that are based on flowers as raw material, the obsession for growing flowers is on the high. With a total area of 168 hectares under cultivation for commercial floriculture in Kashmir , about 250 farm families are directly involved in this pursuit. The departments of Agriculture, Floriculture and Sher-e-Kashmir University of Agricultural Science and Technology of Kashmir (SKUAST-K) is providing ample technical support resulting in the generation of the average farm income to Rs. 5000- 10,000 per kanal. In 2008, about 15 hectares of land were utilized for flower seed production, 28 for Gladioli cut flower production, 04 for production of loose flowers, 16 for production of other cut flowers and 01 hectares for production of cut flowers under cover. Similarly, 16 hectares of land utilized for production of flowering bulbs, 70 for production of aromatic crops and 18 for production of nursery plants. The green meadows and pastures, lively springs and streams, lofty snow bound peaks and flowers of diverse varieties have been known worldwide to make Kashmir a heaven in miniature, lets hope, it also plays its role in adding to the prosperity of its people.