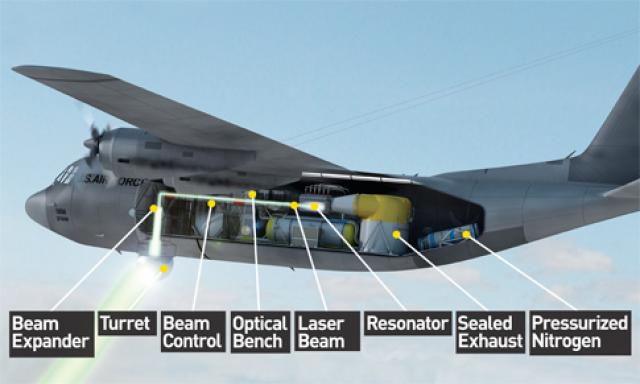 Atom bombs are just beginning. In the last half century the master brains in the Military on Earth developed an arsenal of weapons that is increased the domination of authority.

Despite of Challenges arises from the Under Developing countries and the rivals of the United States of America, the US air force has spent $4.3 billion on a flying laser that it hopes to shoot down ballistic missiles in flight.

The first test is planning to come in 2009. Plane’s crew has 30-140 seconds to hit a target the size of a basketball that is hundreds of kilometres away.

It is mainly designed to kill SCUD-type tactical missiles; may be able to destroy long-range intercontinental missiles(ICBMs) if close enough.

The working nature of the Flying Laser termed by an army official as:

2. Missile breaks above clouds, is picked up by aiming laser ;

5. Sensors evaluate whether missile was killed.

Last December, Boeing, under contract from the Department of Defense, installed a $200-million prototype of the laser into a C-130 at Kirtland Air Force Base in New Mexico in preparation for test flights this year.

Filed under: Media & Tech, US
Share Tweet Pin G Plus Email
previous article: India and Russia under Eagle Eye of China
next article: Anil Dhirubhai Ambani Group has Finalised 69 films in 9 Languages for Production and Distribution