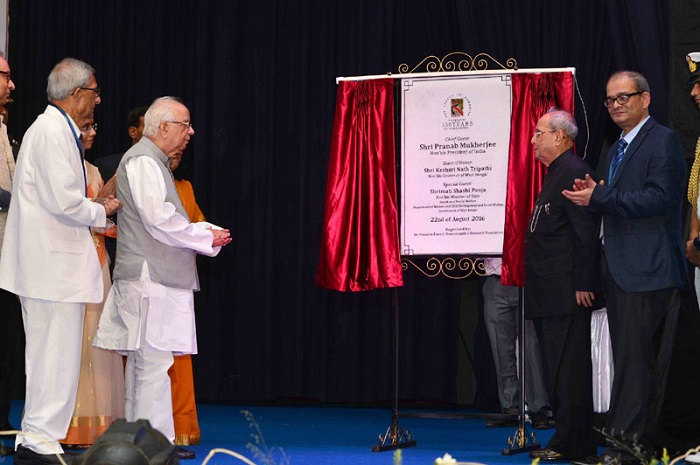 The President, Mr. Pranab Mukherjee at a function ‘The Legacy to Humanity: Celebrating 150 years of Homeopathy’, organised by the Dr. Prasanta Banerji Homeopathic Research Foundation, in Kolkata, in Kolkata on August 22, 2016.The Governor of West Bengal, Mr. Keshari Nath Tripathi and other dignitaries are also seen.

Kolkata (PIB-GR-TYP-BIN): The President of India, Mr. Pranab Mukherjee addressed a function ‘The Legacy to Humanity: Celebrating 150 years of Homeopathy’ as Chief Guest in Kolkata, West Bengal on Aug 22. This event has been organized by Dr. Prasanta Banerji Homoeopathic Research Foundation to commemorate 150 years of association of Dr. Banerji’s family with homoeopathy.

Addressing the gathering, the President said that the generational association of Dr. Prasanta Banerji’s family with Homeopathy dates back to the mid-nineteenth century. Dr. Banerji’s grandfather, Ishan Chandra, was Pandit Ishwar Chandra Vidyasagar’s brother. Vidyasagar was once treated for migraine with homoeopathy. Pleased with the results, Vidyasagar convinced his brother Ishan Chandra to pursue this line of treatment. Ishan Chandra learned homoeopathy and took to treating the poor as a charitable cause. Ishan Chandra’s son, Pareshnath Banerji, practiced homoeopathy in a village in Bihar named Mihijam.

His fame attracted patients from far and wide. He became a pioneer in homoeopathic medicinal mixtures in India. Dr. Prasanta Banerji, the second son of Pareshnath Banerji, is the third generation practitioner of homoeopathy in this illustrious family line. His son, Dr. Pratip Banerji, has kept the family tradition alive. The Homoeopathic Research Foundation was established by Dr. Prasanta Banerji and his son, Dr. Pratip Banerji, in 1993. It was set up with the objective to make homeopathy a scientific and effective mode of alternative medicine. The Foundation is rendering yeoman’s service to the masses through provision of wide-ranging homoeopathic healthcare.

The President said that focused attention on research is crucial to unearth greater scientific understanding of homoeopathy. Use of latest knowledge could pave the way for cutting edge research in this field. It could lead to the affirmation of homoeopathic medicines in fundamental and clinical conditions. It is heartening to note that the Dr. Prasanta Banerji Homoeopathic Research Foundation is involved in active research. It accrues data about various life threatening diseases from the treatment it administers using The Banerji Protocols.

The President said that seized of the need to promote these alternative healing systems, the Department of Indian Medicine and Homoeopathy was created by the Government of India. It was later re-named Department of AYUSH and became a full-fledged Ministry last year.