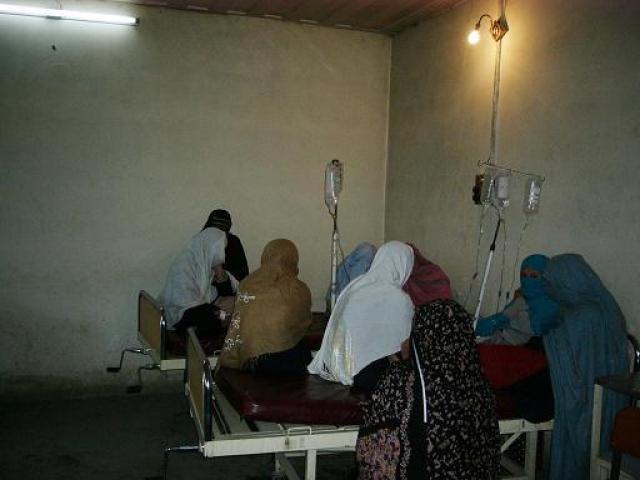 CHITRAL: AS well as 40 girls students of Jamia Mohsinat ( A religious school)   at Chitral town including one male teacher and director of the school (Mohtamim) badly affected and victimized by Gastroenteritis due to food poison. According to Medical Superintendent of District Headquarters hospital Chitral Dr. Nazir Ahmad and Casualty Medical Officer Dr. Nisar some 40 female student’s one female instructor and one male teacher (Mohtamim/Diretor) of Jamiatul Mohsinat for girls Chitral  were rushed to DHQ hospital early in the morning on Sunday. They said that one Dr. Saifur Rehman who settled in America   and his brother in law had arranged feast dinner in honor of  students of Religious School near polo ground Chitral. The dinner was consisting on meat, rice, pulses and bread. When they eaten the dinner they  felt pain and started vomiting with lose motion. They were rushed to DHQ hospital early in the morning where MS of the hospital declared emergency and all doctors were called to the hospital hence they recovered after continue struggle of hospital staff. Khaleeq Ahamad Khan Mohtamim of Madrasa told this scribe that this was the first chance that our students badly affected by food poison. He said Muhammad Ismaiel who living in our neighborhood had sent feast food for girls students when they eat it they all including me badly affected. He told that Ismail had purchased meat from a Afghan refugee who working here as batcher. Hospital authority said that the incidence occurred might of expire or unhygienic meat. In this connection when  contacted Nisar Khan station Head Officer (SHO) police station Chitral he said that police has gone on the spot and taken in posses remaining food items which were handed over to hospital authority for laboratory test and on arrival of its medical report case would be registered in police station Chitral.

House gutted goods worth of million rupees converted in ashes.

CHITRAL: House of Akbar Wali son of Muhammad Ayub who is serving as wireless operator in Chitral police was gutted during midnight of Saturday and Sunday. As a result 9 rooms including bathroom and stores were totally burnt and ceiling of the house completely collapsed down. Akbar Wali said that his house worth some 3 million ruppes were completely gutted and all goods inside the house were burnt and converted in ashes. He said that might some body had put fire on my house but Chitral police denied his claim and termed result of short circuit. Abdul Nasir President Legal Aid Forum for Human rights Chitral visited the burnt house and comfort the affected people he appeal federal and provincial government for compensation of affected person because he has nothing for reconstruction of his house. He also demanded from the district administration and district disaster management authority for providing him tent and essential goods. Meanwhile president human rights also expressed his great concern over that organizations working to control and overcome on such disaster badly failed in this case as well as fire brigade could not reached here due to no path in the area.

Dead body of Muhammad Din resident of Shangal Bagh Dir who had died under avalanche on February 15 including 6 other persons. His dead body was recovered on Sunday and was rushed to his native town where he was laid to rest at his ancestral graveyard. Social and political circle of Chitral have appeal the government and philanthropists for compensation and financial support of bereaved family
G.H. Farooqi PO Box No. 50 GPO Chitral Pakistan phone NO. 03025989602, 0943-302295, 414418
Email: gulhamad@gmail.com

Filed under: Opinion, World
Share Tweet Pin G Plus Email
previous article: House of Million rupees worth gutted by fire
next article: Obama On An Image Saving Mission To Afghanistan After ObamaCare?