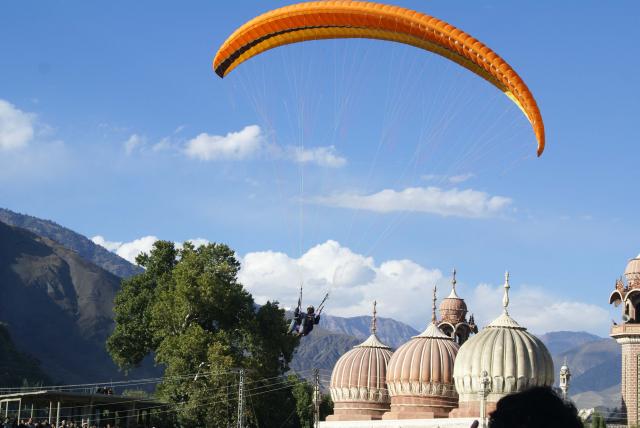 CHITRAL:  District Football Trophy champion trophy 2012 finalized. In final match Jang Bazar football team won the math with 5 goals while its rival team of Goldor could not score any goal. Chief Secretary Khyber Pahtonkhwa Ghulam Dastagir was chief guest on the occasion who was flanged by provincial secretaries of other departments. In first half time Jang Bazar team score three goals and they success in an other two goals in second half while Goldor football team badly failed to score any goal. Thus Jang Bazar team won champion trophy. Theme of the tournament was a Safer tomorrow Disaster  preparedness in Schools organized by Hashoo Foundation. Addressing on the occasion Regional Program Manger of Hashoo Foundation Sultan Mahmood said that main objective for arranging this tournament to create awareness regarding disaster preparedness and rescue sprit amongst the youth. He thanked Chief Secretary KP and other senior bureaucrats for participating in this tournament. Chief Secretary KP Ghulam Dastagir highly hailed talent of Chitral youth in Football and other games He expressed his concerned over that there is no Stadium for youth of Chitral. He announced of a full fledge public stadium for Chitral youth as well as 600000 for paraglide team of Chitral. There are 3 world recorder in Paragliding from Chitral he added.  He also awarded 20000 for winner team and 10000 for runner up team with cash award for Musical group  and organizing  committee. Chief Secretary also announced cash award for two special persons Amjad and Khan. Later on he distributed Trophy and Cups among the players. At last players of both teams presented folk dance on beating  of drum and expressed solidarity with each other. Thousands of people/spectators  participated in the final match.
G.H. Farooqi C/O Manager bank Islami Main branch Chitral phone No 0943-320737, 0943-316052, 0943-414418  , 03025989602, 03337069572, 03159698446, 03469002167
email: gulhamad@gmail.com
Filed under: Opinion, World
Share Tweet Pin G Plus Email
previous article: District Football Champion Trophy Tournament Finalized
next article: What did he gain in his life?