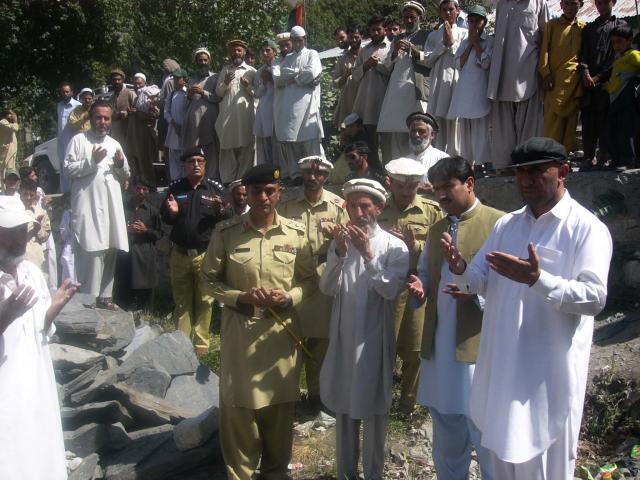 CHITRAL: The groundbreaking ceremony of maintenance of Football (parade) ground of Government Centennial Model High School Chitral held here in a simple but prompt ceremony. Commandant Chitral Scouts Col Suhail Iqbal was chief guest on the occasion while the ceremony was presided over by Samad Gul Executive District Officer (EDO) Schools & Literacy Chitral. Tehsil Nazim Sartaj Ahamd Khan while addressing the ceremony thanked Former Federal Interior Minister Aftab Ahmad Khan Sherpao for granting rupees 500000 for maintenance of this ground. He requested Commandant Chitral scouts and football association as well border police to support them in shape of manpower and technical support because the fund is very less and work is more than its limitation. He said youths of Chitral are fond of spots but unfortunately there is no stadium at Chitral. Addressing on the occasion EDO Schools & Literacy Samad Gul stressed on contractor to work honestly. He said that if the previous contractor work with honesty now there would be no need of repair of this ground but unfortunately main reasons of downfall of the country are dishonesty of contractors.

Muhammad Hussain Former president District Football Association thanked Tehsil Nazim and Commandant Chitral Scouts for taking initiative for maintenance of this historical ground. He condemned the district government for damaging this ground on the pretext of repair. He said that this ground having international historical background because of the first ground of Mehtari Chitral (the then Ruler of Chitral State) where princes, rulers and British Army officers were also playing here. He said that I would persuade president football association to motivate football players to work here on volunteer basis for achieving maximum progress in fewer amounts. Commandant Chitral scouts said that we are trying our best to utilize this less fund for maximum work he assured for manpower and technical support on behalf of Chitral Scouts.

Kalash girl elope with Muslim, embraced to Islam and married to Muslim boy.

CHITRAL: A teenager Kalash girl Din Nizar from Rumbor village of Kalash valley elope with a Muslim boy friend Abdullah of Ayun. The girl embraced to Islam and later on she married to Abullah with Islamic way. It is worth to mention here that Kalash community having international importance due to unique origin, culture, dress, code of conduct and religious obligatory who have ruled Chitral state in early 1600 century. But their population is reducing day by day due to conversion to Islam, high mortality rate, lack of health and civic facilities. Kalash community having international level importance not living any where in the world except Chitral. But now their population has been reduced to 3000 only in three valleys. Conversion towards is great thread to Kalash community and their number is reducing day by day.

Telephone Exchange of Mastuj out of order for the last one week.

Telephone Exchange of Tehsil Mastuj is out of order for the last one week as a result thousands of consumers facing numerous problems and they can not contact their relatives. As well as V wireless phone system also out of order along with line connection. Inhabitants of the area and President Human Rights Monitoring Committee Miss Shahira Khan appeal high ups of the PTCL for restoring communication system at Mastuj area.