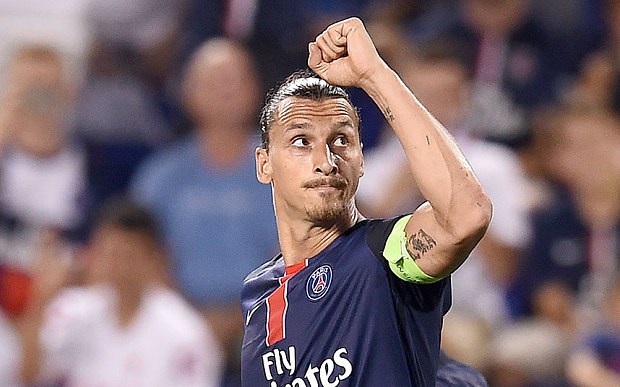 Wayne Rooney is 30 years old and is fast approaching the stage in the life of a Manchester United player where it is time for him to take off his boots and become part of a TV studio where he has to drone on and on about how things were better when he was doing better and this is the primary concern of the Old Trafford bosses. They have begun looking for a replacement for this man and naturally they have zoomed in their focus on none other than Zlatan Ibrahimovic. The odd thing is that the Swede is older than Rooney so it is a bit confusing for people.

However, even if he is older, his last four years have been spent resting in Ligue 1 where he sits in the Lotus position and nods the ball into the net a number of times in a week. But, Manchester United has to face some complications in their pursuit of Ibrahimovic and these are the reports we have been hearing that Arsenal and Chelsea have also expressed interest in Zlatar. It is also rumored that the player himself is favoring a move to London because where else can one feel at home than in a heavy metropolis?

Meanwhile, Paris Saint-Germain have their eyes trained on the person who has been referred to as the new Ángel Di María. The French club has expressed their enthusiasm about signing up Giovani Lo Celso because they want the 19-year-old winger to play in the same team as Di María. However, they are not the only ones who have their sights set on the teenager. There are others also keen on enticing the player and this includes Borussia Dortmund, Internazionale and Chelsea. The last few months, Jürgen Klopp has been busy making judgments about Liverpool players.

He is fully aware of the fact that this summer he has to do a lot of clever trading because he is going to be in the dock next season. This is a metaphorical dock where Liverpool hopes to provide conclusive evidence that Klopp is actually doing some good instead of just being a German Harry Redknapp. As he is willing to make the Belgian understand, Klopp has some good news for Christian Benteke; this understanding could pave the way for Liverpool to bring in Leandro Pardes, the Roma midfielder. Also, Mario Götze broke Klopp’s heart when he defected to Bayern Munich from Dortmund, but the latter will be returning to his homeland for renewing his ties with Götze.

Stoke City and Everton are interested in investing in Lewis Cook, the classy teenage midfielder who belongs to Leeds United. It is possible that Massimo Cellino decides to sell, but it could also go the other way; essentially, it all depends on his mood. Tony Pulis is also annoyed that his attempt to take all the joy out of football history was deflected by Leicester City and is now giving some thought to competitive ploughing. He may entertain himself by bidding for Florian Grillitsch, the Werder Bremen midfielder.